Meow! today I am reviewing a new novel by our friend Jon Land:

MARGARET TRUMAN'S MURDER AT THE CDC 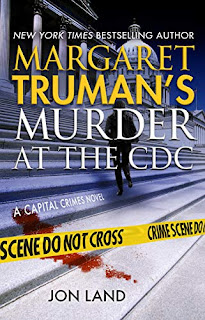 Murder and intrigue on the steps of the United States capital building pulls Robert Brixton into his most personal case yet, in Margaret Truman's Murder at the CDC2017: A military transport on a secret run to dispose of its deadly contents vanishes without a trace.The present: A mass shooting on the steps of the Capitol nearly claims the life of Robert Brixton’s grandson.No stranger to high-stakes investigations, Brixton embarks on a trail to uncover the motive behind the shooting. On the way he finds himself probing the attempted murder of the daughter his best friend, who works at the Washington offices of the CDC.The connection between the mass shooting and Alexandra’s poisoning lies in that long-lost military transport that has been recovered by forces determined to change America forever. Those forces are led by radical separatist leader Deacon Frank Wilhyte, whose goal is nothing short of bringing on a second Civil War.Brixton joins forces with Kelly Lofton, a former Baltimore homicide detective. She has her own reasons for wanting to find the truth behind the shooting on the Capitol steps, and is the only person with the direct knowledge Brixton needs. But chasing the truth places them in the cross-hairs of both Wilhyte’s legions and his Washington enablers.

This is the second in this series we've read and we're  hooked!  If you love sharp thrillers, conspiracy theories, slick sleuths and thrill rides that keep you on the edge of your seat, this is the series for you!  Jon Land does an exceptional job of keeping the reader hooked from page one right through to the end!  a resounding five paws!!!!!

Praise for MURDER AT THE CDC:

“A wild ride with sharp curves, twists and turns. Jon Land has super-charged the iconic Capital Crimes series, merging fact and fiction in this terrific tale that races out of the gate and never lets up.” ―Sandra Brown, #1 New York Times bestselling author of Blind Tiger

“The complicated, traumatic backstories Land constructs for each of his leads never slow the plot, which addresses a host of hot topics such as bullying and school shootings, as it races to a cinematic conclusion. Political thriller fans will be pleased.” ―Publishers Weekly“Murder at the CDC grips you from the chilling first chapter and doesn’t let go until the resolution of the story as you try to crack the conspiracy from different angles alongside the protagonists.” ―Best Thriller Books“Land's deft hand at characterization gives gravity to this superb entry, and the sharp-witted dialogue between good and bad characters is solid. Not one word is out of place. He weaves timely political and environmental issues like the coronavirus throughout the story, seamlessly and without being preachy. No filler--all action.” ―Press-Republican

Posted by ROCCO LOTEMPIO at 9:01 AM