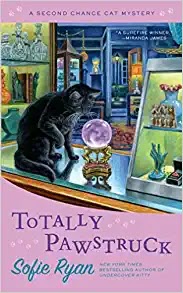 Secondhand store owner Sarah Grayson and her inquisitive rescue cat, Elvis, will need to close the book on a killer in the newest installment of this charming New York Times bestselling series.Although Sarah Grayson is often tending to the contained chaos of her delightful secondhand store in North Harbor, Maine, plus dealing with the quirky personality of her rescue cat, Elvis, she still takes an occasional night off. But her evening out comes to an abrupt end when Sarah discovers Stella Hall, a member of the library board, standing over a body in the street. Although Stella admits that she and the victim had fought about several things including library funding, she is adamant that she is innocent and the real killer is on the loose. Sarah is eager to help, but even with the assistance of Charlotte’s Angels, the senior citizen detectives who rent out part of her shop, there is still a vast amount of circumstantial evidence linking Stella to the crime. The odds may be stacked against them, but Sarah and Elvis, along with the Angels, will work hard to check out the suspects and catch a killer.
Another entertaining instalment in this series by Sofie Ryan aka Sofie Kelly!  Is it us, or does Elvis get more adorable with each adventure?  Five Paws!
EVIL UNDER THE TUSCAN SUN
Stephanie Cole
Tuscan Cooking School Mystery #3
Berkley/MMPB/ 2-1-22
Four stars 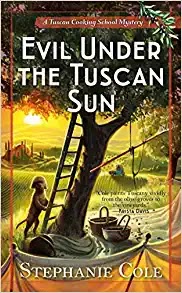 Nell Valenti is at ease when managing a farm to table cooking school in sun-dappled Tuscany, but begins to feel the heat when tasked with catching a killer, in this engaging Italian-set cozy mystery series.When a wealthy New York philanthropist pays top dollar for a private, four-day ziti workshop, Nell Valenti wants everyone at the Orlandini cooking school focused on the task at hand. But complications abound when Nell’s boyfriend Pete Orlandini rushes to Rome for an unexpected business trip, Chef Orlandini is more preoccupied with a potential spot on an American cooking show than preparing for the workshop, and an uninvited woman sneaks into the villa to inspect Pete’s olive grove. The last disturbance proves deadly, and when the woman’s body is found in the grove, Nell must investigate before her hopes for the workshop, like the olives, are crushed. Nell now has another item on her checklist--keep the Orlandinis out of trouble and the wealthy ziti-lovers happy while she looks into the stranger’s past. When Nell discovers that for one of the Orlandinis, at least, the murder victim was not such a stranger after all, she’ll learn that when a detective goes digging in Italy, she’d better be ready for truffle.
Okay, food plus a good mystery!  We're there!  Four paws.
A DEADLY BONE TO PICK
PEGGY ROTHSCHILD
BERKLEY/HC/2-8-22
FOUR PAWS 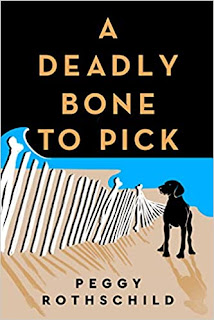 When Molly Madison, dog-wrangler extraordinaire, stumbles upon a murder in her new hometown, she must track down a killer to save the day.Ex-police officer and former P.I. Molly Madison is starting over. After the death of her husband, she and her golden retriever, Harlow, move cross-country to California. But as charming and peaceful as the beachside town seems, she soon learns its tranquil tides hold dark secrets. On her first day in the new house, a large, slobbering Saint Berdoodle wanders in. Molly winds up taking on the responsibility of training Noodle since his owner is too busy to do the job. On one of their daily beachside walks, Noodle digs up a severed hand. Once Molly alerts the police and they run a background check on her, an incident from her past makes her an immediate suspect—after all, Noodle’s testimony to clear her name won’t hold much water in court.  To prove her innocence, Molly must rely on instincts keener than a canine’s to sniff out the real killer. But when Molly’s life is put in danger, will her two very loyal pups be able to rescue her?
A new promising series (even if it does feature dogs)  Four paws.
HOMICIDE AND HALO HALO
MIA MANANSALA
ROSIE KITCHEN MYSTERY #2
TPB/BERKLEY/2-8-22
FOUR PAWS 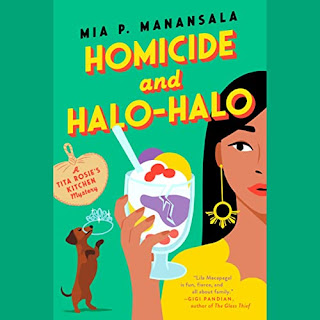 HDeath at a beauty pageant turns Tita Rosie's Kitchen upside down in the latest entry of this witty and humorous cozy-mystery series by Mia P. Manansala.

Things are heating up for Lila Macapagal. Not in her love life, which she insists on keeping nonexistent despite the attention of two very eligible bachelors. Or her professional life, since she can't bring herself to open her new café after the unpleasantness that occurred a few months ago at her aunt's Filipino restaurant, Tita Rosie's Kitchen. No, things are heating up quite literally, since summer, her least favorite season, has just started.

To add to her feelings of sticky unease, Lila's little town of Shady Palms has resurrected the Miss Teen Shady Palms Beauty Pageant, which she won many years ago - a fact that serves as a wedge between Lila and her cousin-slash-rival, Bernadette. But when the head judge of the pageant is murdered and Bernadette becomes the main suspect, the two must put aside their differences and solve the case - it looks like one of them might be next.