JOHNNY DEPP'S DARK SHADOWS -THE TIMES, THEY ARE A CHANGING? 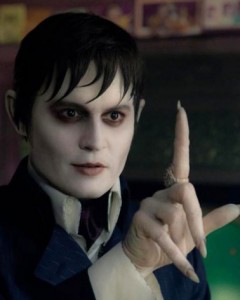 OK, so the HUMAN and I watched the debut of Johnny Depp's Dark Shadows movie trailer on Ellen Thursday, and several times on You Tube thereafter (for those of you who might have missed it, here's a link: http://www.youtube.com/watch?v=isjg9O7ifwM )

And the final verdict is: Confusion.

OK, it wasn't as bad as I thought it would be.  It would appear from the trailer that the duo of Depp/Burton went more of a comedic route versus a straight horror story, but...

the whole charm of the original 1960's gothic soap was the fact that, even though there were TONS of bloopers and the dialogue was too campy to be believed, the actors played it like they were doing Macbeth at the Royal ShakespeareanTheatre.  They took the whole damn thing seriously, like vampires, witches and werewolves really did exist and this show was no different from DAYS OF OUR LIVES or ONE LIVE TO LIVE, when, in fact, it was.

But...we have to take into consideration times have changed.

this is 2012, not 1968-69, when DARK SHADOWS was considered a novelty and at the height of its popularity.  In the years since DS went off the air, we've been inundated with the paranormal, in books and television and movies.  Vampires are no longer something to be feared, as in the days of  Bela Lugosi and Christopher Lee; although they retain thier air of mysteryt and confident sexuality, thier charm has become more blatant.  Vampires have become an object of lust and desire more so than ever: If you doubt that, just take a look at some prime examples: Edward Cullen of Twilight, Stefan or Damon of The Vampire Diaries are good ones.  the role of Cullen so elevated the actor who portrays him, Robert Pattinson, to star status that he was voted in a recent poll "the  man women would most leave thier husband for"  (Sorry, George Clooney!)

In the day, Jonathan Frid was idolized by hundreds of thousands of women who would stop whatever they were doing at four o'clock in the afternoon to switch on Dark Shadows.  He enjoyed a pop culture/sort of sex symbol status rivaling that of Edward Cullen and Stefan and Damon. (or, rather, his character did).  Women sent him fan letters offeirng him thier jugulars, as well as other parts of ther anatomy.

But Dark Shadows was a rarity, a one of a kind, unique in its time.  To do a remake in exactly the same vein (honest, no pun intended) seems...well, sacriligious, in a way.  We all know how remakes do. (take a look at Bewitched, the movie - need I say more?). Plus, we're playing to a different audience now.  the largest percentage of moviegoers today fall into the 18-25 demographic, and, let's face it: the Dark Shadows of the 1960's would not cut it with them.

So, will devout DS fans in the 50+ agegroup (where most of them fall) like this film?  Maybe, maybe not.  I have a feeling those in their teens or twenties will love it. It appears to have the right blend of comedy and romance that will appeal to that crowd. Because, in the end, Dark Shadows wasn't a horror show, or a comedy...it was a love story. A tale of unrequited love between Barnabas and Josette, a triangle between Barnabas, Josette and the evil witch, Angelique.  And even though Barnabas fell in love at the drop of a hat (Josette, Vicki Winters, Maggie Evans, Roxanne Drew, Lady Kitty Hampshire...cripes, everybody EXCEPT the one woman who remained faithful to him through everything, Julia Hoffman) the love story was always front and center.

Well the HUMAN will be at the theatre May 11, waiting to view the film in its entirety (becasue, let's face it - you really can't tell all that much from a trailer).  I shall await the debut of DARK SHADOWS via On Demand.  Will it be different from the soap? Heck, yes. And it should be, for the simple reason that, just as Barnabas was confused waking up in 1972, what played so well to us in 1969 won't be the same in 2012. 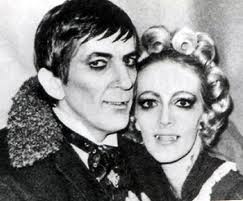 Dark Shadows has fallen prey to our changing times, and that's where the confusion comes in for those of us a bit reluctant to let the past go.  But go it must, and hopefully for the better.  Comedy or horror, as long as there's a love story, I say....onward! It's all the characters, a bit more modernized, after all.  We've just got to wipe the slate clean and view it with a fresh mind:  hard, I know, but once again, a sign of the times.  and for those offput by Depp's garish  makeup, let's not forget:  when Barnabas went back in time to 1897, his skin was white kitties!  And yes, there were those dark circles under his eyes! (see photo above)

To sum up, some will love it, some will hate it - mostly DS purists.  No one's right or wrong.  Dark Shadows, like every other remake, is tailored for the time era it's remade in - but only time itself will tell if the Depp/Burton remake will carve a niche for itself in history like the original soap opera. What do you think?  Leave your comments with your email addresses below, and one lucky reader will win a copy of Kathryn Leigh Scott's, Return to Collinwood!  (Contest closes Friday, March 23, midnight EST. Open to US residents ONLY, sorry.)

Enough of my soapbox, kitties!  Get ready, becasue not only is Tuesday the first day of
Spring - it's the day CHARLAINE HARRIS sits in my hotseat.  (Speaking of vampires, right? Charlaine is the creator of the Southern Vampire series - for those of you who live under a rock, that's the Sookie Stackhouse/True Blood HBO series!)

It's something you won't want to  miss!
Meow!

Posted by ROCCO LOTEMPIO at 8:23 AM