Meow, it's time for our February Cozy reviews!
I'll start off with the one book from Berkley Prime Crime: 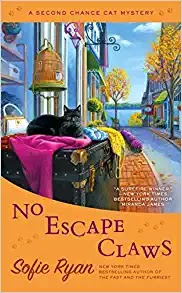 Another adventure with one of my favorite sleuths, Sarah Grayson and her feline ally, Elvis!


It's fall in North Harbor, Maine, where Sarah owns a charming secondhand shop and sells lovingly refurbished items of all kinds. The shop is always bustling--and not just because a quirky team of senior-citizen detectives works out of it and manages to get in even more trouble than Sarah's rough-and-tumble rescue cat, Elvis.

A cold case heats up when young Mallory Pearson appears at the shop. Mallory's father is in prison for negligence after her stepmother's mysterious death, but Mallory believes he is innocent and asks the in-house detectives to take on the case. With Sarah and Elvis lending a paw, the detectives decide to try to give Mallory's father a second chance of his own.

I'm a big fan of this series, andalso of The Magical Cats mysteries, which Ryan writes under the name Sofie Kelly.  This adventure does not disappoint!  Five paws! 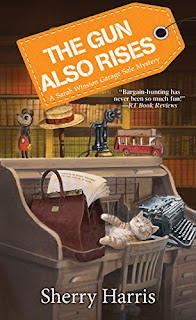 A wealthy widow has asked Sarah Winston to sell her massive collection of mysteries through her garage sale business. While sorting through piles of books stashed in the woman's attic, Sarah is amazed to discover a case of lost Hemingway stories, stolen from a train in Paris back in 1922. How did they end up in Belle Winthrop Granville's attic in Ellington, Massachusetts, almost one hundred years later?


Before Sarah can get any answers, Belle is assaulted, the case is stolen, a maid is killed, and Sarah herself is dodging bullets. And when rumors spread that Belle has a limited edition of The Sun Also Rises in her house, Sarah is soon mixed up with a mobster, the fanatical League of Literary Treasure Hunters, and a hard-to-read rare book dealer. With someone willing to kill for the Hemingway, Sarah has to race to catch the culprit—or the bell may toll for her!

I thoroughly enjoyed this mystery, mainly becasue I too am a collector of antique books. Also - there is a lot going on here, which makes for an exciting read! four paws! 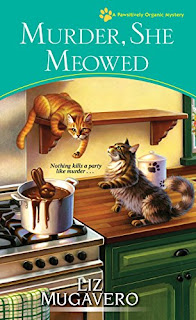 Stan and Jake’s wedding will soon take place on the town green in Frog Ledge, Connecticut, followed by a reception at their beloved Irish pub filled with friends, family, and their four favorite canine companions. Stan just has to endure the traditional girls’ night out first. Male strippers jumping out of gigantic cakes aren’t her preferred entertainment. But the hired hottie never gets around to taking it all off . . . because someone takes him out first with one of Stan’s kitchen knives. A heartbroken Stan recognizes the victim as one of the delivery men from the local farm—who must have been moonlighting for some extra cash. Now the guest list has turned into a suspect list—and Stan’s making a vow to find the killer . . .


I have always loved htis series and i'm glad to see Stan and Jake getting hitched, and also that her impending nuptials don't dim her love of solivng mysteries! Fans will enjoy this! Four paws.