MA-ROW!  It's time for our April cozy reviews!

WHEN THE CROW'S AWAY 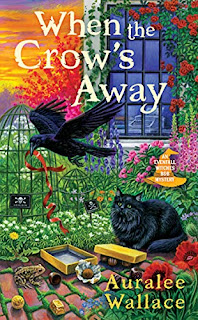 The ghost of a recently deceased chocolatier believes he was murdered, and it's up to young witch Brynn Warren to use her magical gifts and old-fashioned sleuthing skills to find out how he really met his bitter end in this enchanting new Evenfall Witches B&B Mystery.After spending months unable to use her powers, Brynn Warren is once again using her gift and working at her family's bed-and-breakfast. Her heart is full, and although one of her aunts wonders if it might be a little more full with a bit of romance in her life, Brynn is certain that finding love again is not in her future. In fact, she can’t imagine anyone being more certain of anything…except for maybe, the recently deceased Mortimer Sweete. He’s certain he’s been murdered, and he wants Brynn’s help to bring his killer to justice. Mort is positive he knows who killed him: his business partner's wife, Cookie, who had been trying to get them to sell the candy shop for months. But Brynn doesn't share his conviction. After all, the coroner ruled his death natural causes, and Mort did have health problems in life. But with Cookie putting up a For Sale sign for the shop already, Brynn knows she can't just let it go.  Trying to solve a might-be murder while attempting to stop her aunt from meddling in her personal life seems like a recipe for disaster. If Brynn wants to bring Mort's spirit peace, she'll have to rely on all her skills—both magical and mundane—to uncover the truth.

the only thng we love more than a good cozy mystery is a good cozy with paranormal elements!  This genre is making a comeback and we couldn't be more pleased.  The second in this series is a purr-fect escape!  four paws! 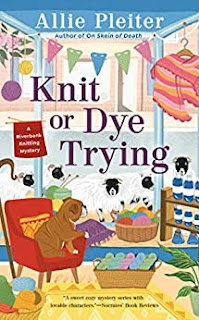 Business is booming for Libby Beckett and her fabulous Maryland shop, aptly named Y.A.R.N., but when a town festival brings a fatality with it, Libby gets all tangled up in murder.As spring comes to Collinstown, the village launches a food festival to draw a new group of tourists. Libby, proud owner of Y.A.R.N., has planned a yarn event to provide an alternative option to a foodie weekend. Artisan fiber dyer Julie Wilson—known for her work with animal-friendly, plant-based knitting fibers such as bamboo and hemp as well as her brilliant use of color—will hopefully draw a crowd with a special dyeing workshop.The festival begins, but it draws more than crowds. First a flock of sheep parades down the street, herded by farmers protesting Julie’s antiwool stance. Then Julie’s celebrity chef sister appears, and the siblings resume a long-standing rivalry. Despite all this, Julie’s workshop has sold out. Libby is thrilled, and they’re preparing for a full house. But the night before the event, Julie is found alone in the warehouse event space—dead. The witty “Watch Julie Wilson Dye” workshop title now has a terrible new meaning—and it’s up to Libby to catch a crafty killer.

Crafts, particularly knitting, are always popular and the author has created a spunky heroine in Libby Beckett!  A good sequel to a promising first entry. Four paws. 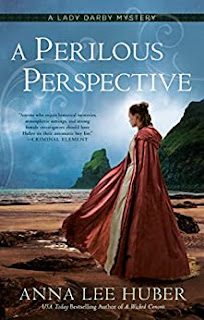 An all-new historical mystery in this USA Today bestselling series featuring beloved inquiry agents Lady Kiera Darby and her dashing husband, Sebastian Gage.Argyll, Scotland. July 1832. After a trying few months in Edinburgh, Kiera and her husband and investigative partner, Sebastian Gage, are eager to escape to the Highlands with their three-month-old child. Kiera is overjoyed for her cousin Rye and her detractor-turned-friend Charlotte who are being wed in a private ceremony at the estate of Rye’s great-uncle, the Marquess of Barbreck, in what seems to be the perfect wedding party. But when Kiera is invited to peruse Barbreck’s extensive art collection, she is disturbed to discover that one of his most priceless paintings seems to be a forgery. The marquess’s furious reaction when she dares to mention it leaves her shaken and the entire house shocked. For it turns out that this is not the first time the word forgery has been uttered in connection with the Barbreck household. Matters turn more ominous when a maid from a neighboring estate is found murdered  where the forged painting hangs. Is her death connected to the forgeries, perhaps a grisly warning of what awaits those who dare to probe deeper? With unknown entities aligned against them, Kiera and Gage are forced to confront the fact that they may have underestimated their opponent. For they are swiftly made to realize that Charlotte’s and Rye’s future happiness is not the only issue at stake, and this stealthy game of cat and mouse could prove to have deadly consequences.

This is the tenth entry in this popular historical mystery series.  Fans of Lady Darby will enjoy the cat and mouse game, and new readers will be eager to read the previous!  four paws. 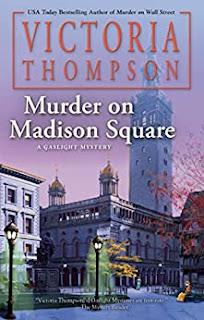 Sarah and Frank Malloy must catch a scheming  killer in this latest gripping installment in the USA Today bestselling Gaslight Mysteries  Former policeman Frank Malloy is frustrated when a woman requests his private detective services to implicate her wealthy husband in adultery, the only legal grounds for divorce in New York state. Although Mrs. Bing seems genuinely distressed about her marriage and desperate to end it, she refuses to tell Frank the reason she absolutely must divorce her husband and admits she has no legal grounds. Frank explains he won't manufacture evidence for her and sends her on her way.  The following week, Frank and Sarah happen to be attending the first ever auto show in Madison Square Garden when they meet the woman's husband, Alfred Bing, who has invested in a company that produces one of the electric motorcars on display. A few days later, the newspapers report that millionaire Alvin Bing has been found dead, pinned beneath one of the wheels of his very own motorcar. But who was driving it? The obvious suspect is Mrs. Bing, but Frank and Sarah find that nothing is as it seems in their puzzling, dangerous search for truth.
There's a reason this series has been around for twenty five books. The author consistently delivers a good, gripping msytery.  four paws.