I recently had the pleasure of receiving an advance copy of THE KITTEN LADY'S CATIVITY BOOK and let me tell you, t was a definite delight!  Not only is it full of fun facts for the cat lover, but there are games, puzzles, even crafts to delight cat lovers from nine to ninety!

ROCCO read and approved this book and we highly recommend it for all cat lovers (and for people who just love crafts and puzzles!)  We tried a few of the puzzles: For example, ROCCO's true cat name is Duke Itty-Bitty Boo-Boo!  Fun, fun, fun!  Five Paws!!!!!! 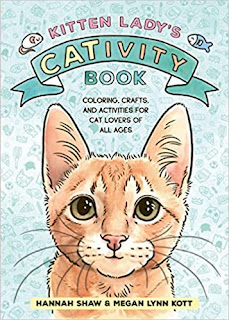 COLORING, CRAFTS AND ACTIVITIES FOR CAT LOVERS OF ALL AGES

“Love isn’t just a feeling you have for cats, but an action you take on their behalf. And what better way to practice taking action than through fun, informative, and compassion-building activities?” —Hannah “Kitten Lady” Shaw

Whether you’re a seasoned cat person, a first-time foster parent, or anything in between, Kitten Lady’s CATivity Book is a fun-filled keepsake to get to know, understand, and celebrate all the cats in your life.

Kitten rescuer and humane educator Hannah Shaw along with illustrator/cat advocate Megan Lynn Kott are the perfect guides on this interactive journey. Along the way, they’ll demystify the wonderful world of feline welfare and share their own hard-won advice for helping cats in need.

Kitten Lady’s CATivity Book is a delightful must-have for any engaged cat lover interested in making a difference.

Posted by ROCCO LOTEMPIO at 12:41 PM No comments:

Ma-Row! It's time for our October cozy reviews!

The Crime That Binds 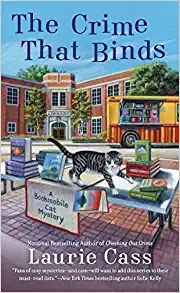 Librarian Minnie Hamilton and her rescue cat, Eddie, are ready to pin down a bank robber in the newest installment of the delightful Bookmobile Cat mystery series. Late March is prime reading weather in the small northern Michigan town of Chilson. Though snowfall and cloudy skies deter outdoor activities, life inside the bookmobile is warm and cheerful. But as Minnie and Eddie are making the rounds to deliver comforting reads, they see something strange: loyal bookmobile patron Ryan Anderson making a sudden u-turn and speeding away. When Minnie discovers the police want to question Ryan about a bank robbery and the death of a security guard, she realizes she’s one of the only people who thinks Ryan isn’t morally bankrupt. When an additional murder victim is discovered, the police immediately suspect her patron, but Minnie isn’t convinced. And when she encounters Ryan hiding from the police, she decides to help him by investigating the crimes. Minnie and Eddie will have to fight tooth and claw to prove his innocence

This is a favorite series of ours. We love Minnie and we especially love her bookmobile cat, Eddie! Always fun to read along and help them solve a mystery!  Five Paws.

Ghost and the Stolen Tears 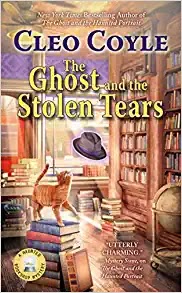 With the help of her gumshoe ghost, bookshop owner Penelope Thornton-McClure sets out to clear an innocent woman of a shocking crime in this all-new entry in the “utterly charming” (Mystery Scene) Haunted Bookshop Mysteries from New York Times bestselling author Cleo Coyle.Norma is a modern-day nomad. Living out of her van and teardrop trailer, she revels in self-reliance, solitude, and reading in the glorious peace of nature. Jovial, wise, and scrupulously honest, she’s become an uplifting presence in the little town of Quindicott, Rhode Island, where bookseller Pen is thankful to have her part-time help. But it’s Norma’s other job, working as a housekeeper at the Finch Inn, that gets her into terrible trouble. Norma is accused of stealing jewels from a guest’s room: the legendary Valentino Teardrops, an antique necklace and earring set, inherited by a young socialite. Pen doesn’t believe Norma is guilty of the crime—though the evidence is distressingly strong. And when the spirited Norma vanishes before her arrest, Pen turns to another spirit… Jack Shepard, PI, may have been gunned down decades ago, but his memory hasn’t been ghosted. Back in the 1940s, those same Valentino Teardrops starred in a bizarre case of betrayal and murder. From the look of things, history is about to repeat. Now Jack is back on the job, and Pen is eternally grateful.
Lovers of Coyle's CoffeeHouse series will love this one!  Can't beat an otherworldly PI!  Definite five paws!
Soul of a Killer
Books and Biscuits Mystery
Abby Collette
MMPB/Berkley/10/4/22
four paws 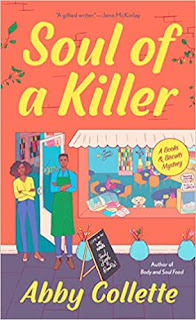 In this mouthwatering cozy mystery series, fraternal twins Keaton and Koby are trying to run their combined soul food café and bookstore, but they find themselves searching for a cold-hearted killer.Keaton and Koby are fraternal twins who were separated as children, but now they’ve found each other and opened Books & Biscuits in the pleasant Pacific Northwest town of Timber Lake. Business is booming, but even so, trouble always seems to find them. Mama Zola, Koby’s devoted foster mom, has taken up residence in Timber Lake. She and Pete, one of the bookstore’s quirky employees, bring a peach cobbler over to her church’s potluck, and then someone who sampled the cobbler is found dead. Mama Zola and Pete find themselves suspects in the murder, but luckily Koby and Keaton are ready to sling out a side of justice.
good entry in a promising new series.  A+
Blackmail and Bibingka
Mia P. Manansala
Trade paperback/10/4/22
Berkley
Four Paws 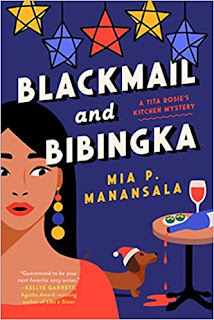 When her long-lost cousin comes back to town just in time for the holidays, Lila Macapagal knows that big trouble can’t be far behind in this new mystery by Mia P. Manansala, author of Arsenic and Adobo. It’s Christmastime in Shady Palms, but things are far from jolly for Lila Macapagal. Sure, her new business, the Brew-ha Cafe, is looking to turn a profit in its first year. And yes, she’s taken the first step in a new romance with her good friend Jae Park. But her cousin Ronnie is back in town after ghosting the family fifteen years ago, claiming that his recent purchase of a local winery shows that he’s back on his feet and ready to contribute to the Shady Palms community. Tita Rosie is thrilled with the return of her prodigal son, but Lila knows that wherever Ronnie goes, trouble follows. She’s soon proven right when Ronnie is suspected of murder, and secrets surrounding her shady cousin and those involved with the winery start piling up. Now Lila has to put away years of resentment and distrust to prove her cousin’s innocence. He may be a jerk, but he’s still family. And there’s no way her flesh and blood could actually be a murderer . . . right?
always up for wine and murder!  They go together, right? Four paws
Plot and the Pendulum
Library Lovers Mystery
Jenn McKinlay
HC/Oct 11, 2022/Berkley
five Paws 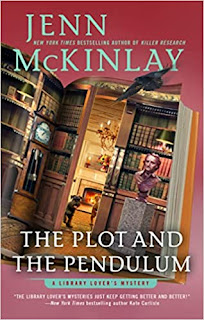 Library director Lindsey Norris is happy to learn the Briar Creek Public Library is the beneficiary of the Dorchester family’s vast book collection. However, when Lindsey and the library staff arrive at the old Victorian estate to gather the books, things take a sinister turn. One of the bookcases reveals a secret passage, leading to a room where a skeleton is found, clutching an old copy of The Collected Works of Edgar Allan Poe. Lindsey does a quick check of missing persons, using the distinctive 80s era clothing worn by the deceased to determine a time frame, and discovers that Briar Creek has an unsolved missing person’s case from 1989. A runaway bride went missing just weeks after her wedding. No suspects were ever arrested and the cold case remains unsolved. Lindsey and the crafternoon crew decide that justice is overdue and set about solving the old murder mystery, using some novel ideas to crack the case.
ONe of our favorite series!  We never tire of helping Lindsey crack a case!  Or her adorable dog (or husband!) Five Paws
GIVEAWAY!
We have a copy of Cleo Coyle's GHOST AND THE STOLEN TEARS to give to one lucky commenter!
Leave your name and email address in our comments section.  ROCCO will draw the winner at random. US entries only please.  Contest closes midnight, October 21~

Posted by ROCCO LOTEMPIO at 12:30 AM No comments:

This October marks one year since the passing of the human's friend and mentor, author Carole Nelson Douglas.  Carole is the person who encouraged the human to "suck it up" and make the changes that enabled the first three volumes in the Nick and Nora series to be published by Berkley.  After being discontinued in "the great cozy massacre" of 2016, NN finally found another home at Beyond the Page!  But if not for Carole's encouragement, there might never have been a Nick and Nora series at all!

Below is our tribute to this fine author and friend, courtesy of Wikipedia:

PIctured above: Carole with "Midnight Louie"

Carole Nelson Douglas (November 15, 1944 – October 2021) was an American writer of sixty novels and many short stories. She has written in many genres, but is best known for two popular mystery series, the Irene Adler Sherlockian suspense novels and the Midnight Louie mystery series.

Douglas was a theater and English literature major in college. After graduation, she worked as a newspaper reporter and then editor in the Minneapolis–Saint Paul area. During her time there, she discovered a long, expensive classified advertisement offering a black cat named Midnight Louie to the "right" home for one dollar and wrote a feature story on the plucky survival artist, putting it into the cat's point of view. The cat found a country home but its name was revived for her feline PI mystery series many years later. Some of the Midnight Louie series entries include the dedication "For the real and original Midnight Louie. Nine lives were not enough."

She began writing fiction in the late 1970s. The late director/playwright/novelist Garson Kanin, a pleased interview subject, took her first novel to Doubleday and it sold shortly after. Amberleigh is a post-feminist historical Gothic novel. Douglas has always addressed women's issues in her fiction and preferred mixing genres from contemporary to historical mystery/thriller, romance and women's fiction, and high and urban fantasy.[1]

Douglas lived in north Texas with her husband, Sam Douglas, and adopted cats.[2]

Posted by ROCCO LOTEMPIO at 9:36 AM No comments: