It's finally here....the cover for Nick and Nora Five, MURDER FAUX PAWS!  Honestly, we didn't think they could top Hiss H for Homicide but we think they have!!!!!

The book will be up shortly at Amazon and Barnes and Noble for pre-order.  Those ordering the e-book can get it for $3.99 if you order it before the release date of February 22!

And don't forget - sales and pre-orders are what make publishers extend writer's contracts and ask for more books! 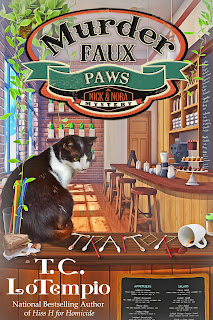 Posted by ROCCO LOTEMPIO at 9:28 AM 8 comments:

Me-ow!  Here are my cozy reviews for January!

Starting the New Year off with: 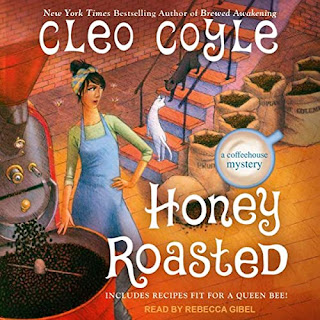 Clare Cosi is busy as a bee planning her honeymoon when murder buzzes into the Village Blend in this all-new mystery in the beloved New York Times best-selling Coffeehouse series.

While struggling to find a romantic (and affordable) destination for her upcoming honeymoon, coffeehouse manager Clare Cosi whips up a honey of a drink made from honey-processed coffee. Clare plans to serve her outstanding new Honey-Cinnamon Latte at her spring wedding to her longtime honey, NYPD detective Mike Quinn. The culinary world is also abuzz about the amazing honey that Clare was lucky enough to source for her shop's new latte. Produced by Madame's old friend "Queen" Bea Hastings, the rare, prize-winning nectar from Bea's rooftop hives commands a premium price, and top chefs compete for a chance to use it in their signature seasonal dishes.

One night, a swarm of escaped bees blanket the Village Blend's chimney, and Clare discovers Bea's unconscious body after she seemingly fell from her high-rise rooftop-hive setup. The police want to rule it as a tragic accident or possible attempted suicide, but Clare does not believe either theory. To sort out this mystery, Clare investigates a world of cutthroat chefs, culinary start-ups, and competitive urban beekeepers. But can she uncover the truth without getting stung?

Clare Cosi is back in a new adventure after what seems to be a much too-long absence!  Love, love, Cleo Coyle's weaving of a spectacular  mystery, and as always, love Clare's sleuthing, and all the supporting characters.  A much beloved series, and we hope there is not another year and a half wait for the next instalment!  Five Paws!!!!! 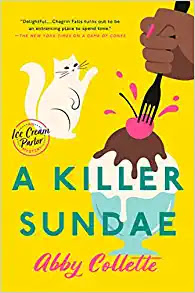 Ice cream shop owner Bronwyn Crewse is in for two scoops of murder in this charming mystery from Abby Collette.Chagrin Falls, Ohio, is gorgeous in the fall, and Bronwyn Crewse, owner of Crewse Creamery, knows just how to welcome the new season. At the annual Harvest Time Festival, residents will get a chance to enjoy hot-air balloons and hayrides, crown a new Harvest Time Festival Queen, and eat delicious frozen treats sold at Win’s freshly purchased ice cream truck. But she gets into a sprinkle of trouble when a festivalgoer is poisoned and Win is implicated.Although the victim was a former Harvest Time Festival Queen, her once-sunny disposition had dimmed into bitterness, leaving no shortage of suspects at the festival. To clear her name before the chill of winter sets in, Win will have to investigate and hope that her detective skills won’t “dessert” her. 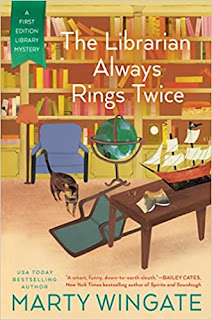 When a mysterious stranger turns up making claims that threaten Lady Fowling’s legacy, Hayley Burke must dig deep into her late-benefactor’s history to uncover the truth and catch a conniving killer in this new mystery from USA Today bestselling author Marty Wingate.It has been nearly a year since I took up my position as curator of Lady Georgiana Fowling’s collection of Golden Age of Mystery writers’ first editions at her library in Middlebank House. I have learned that I need to take the good with the bad. The good: I have finally convinced Mrs. Woolgar to open up the collection to the public one day a week so that they too can share in Lady Fowling’s passion. The bad: although he would not be my first, or even tenth, choice, at the insistence of the board Charles Henry Dill, Lady Fowling’s unscrupulous nephew, is now my personal assistant.On one of our first days open to the public, Mr. John Aubrey shows up at Middlebank House and insists that Lady Georgiana Fowling is his grandmother. Mrs. Woolgar is scandalized by his claims, and Charles Henry, who feels he has been cheated out of his rightful inheritance as Lady Fowling’s heir, is furious. I do not know that I believe Mr. Aubrey, yet he has knowledge of Lady Fowling’s life and writings that few possess. To further complicate matters, an associate of Mr. Aubrey’s intends to help us uncover the truth of John’s story. But before he can do that, he is murdered and the police have reason to suspect Charles Henry.As much as I would like to lock up Charles Henry and throw away the key, I cannot believe he is a killer. And I also know there is something dead wrong about Mr. Aubrey’s tales regarding his “grandmother” Lady Fowling. I will need to make sense of her past in order to suss out the true villain of this story.
An exciting additiion to this series!  You just have to admire Hayley's tenacity in folloiwng clues!  Would recommend anyone give it a try.  Four Paws.
SPIRITS AND SOURDOUGH
MAGICAL BAKERY MYSTERY
BAILEY CATES
MMPB; BERKLEY; 1/4/22
FOUR AND A HALF PAWS 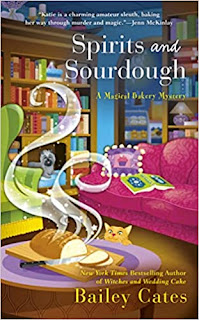 Baker Katie Lightfoot needs a sprinkle of magic to solve a haunting mystery in the newest book in this New York Times bestselling series.Hedgewitch Katie Lightfoot works at the Honeybee Bakery in Savannah, and she's always up for investigating her adopted home's rich supernatural history. That's why she's taking a ghost tour for the very first time. But when the psychic tour guide tells Katie that she's being followed by the ghost of a recently murdered woman, Katie realizes she met the victim earlier that day, just before she died. She knows she must bring the killer to justice.And this murder isn't the only mystery Katie needs to solve. Her new husband, Declan McCarthy, is missing the guardian spirit who always watched over him, and she's concerned that Deck's life could be at risk if they can't find him. Under pressure from the living and the dead, Katie will have to use all of her magical skills to start an investigation from scratch and avoid half-baked alibis, because this baker kneads to find a killer.
This series combines two of my favorite things:  magic and baked goods! Bailey Cates is a master at this craft. This series continues to be - ahem - enchanting!  four and a half paws!