It's time for September cozies!!!!

A summer of fun at a Catskills resort comes to an abrupt end when a guest is found murdered, in this new 1950s set mystery series. It’s the summer of 1953, and Elizabeth Grady is settling into Haggerman’s Catskills Resort. As a vacation getaway, Haggerman’s is ideal, and although Elizabeth’s ostentatious but well-meaning mother is new to running the resort, Elizabeth is eager to help her organize the guests and the entertainment acts. But Elizabeth will have to resort to untested abilities if she wants to save her mother’s business. 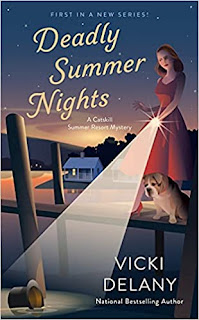 When a reclusive guest is found dead in a lake on the grounds, and a copy of The Communist Manifesto is found in his cabin, the local police chief is convinced that the man was a Russian spy. But Elizabeth isn’t so sure, and with the fate of the resort hanging in the balance, she’ll need to dodge red herrings, withstand the Red Scare, and catch a killer red-handed.

Looks like an interesting start to a new series by Vicki Delany (author of the Sherlock Holmes Bookshop series).  It's set in the 1950's, which is unusual.  Will be interesting to see where this goes.  Solid plot, as per usual with Delany's writing.  four and a half paws!

An urgent note from a friend spurs Ann Gay to visit her recently married cousin, Jacqueline Heaton. Upon her arrival at Fiddler's Fingers, a remote, pine-grown estate on Lake Superior, Ann immediately senses her cousin's fear—someone has been playing increasingly malicious tricks on the Heatons, a proud family of Minnesota lumber tycoons, and worse yet, they seem determined to frame Jacqueline. Ann quickly resolves to take Jacqueline and her young daughter, Toby, away from the danger. But what began as seemingly trivial pranks—ruined clothes, a burnt bed, a smashed boat—escalates to direct attacks and ultimately murder. Dangerous waters crash against the finger-like rocks on the lakeshore, making a sound like a guttural chuckle, one that seems to mock the murder that took place there—but no one is laughing when everyone on the estate becomes a suspect. Potential motives are revealed as Ann learns more about the Heaton family, and with no chance of anyone leaving Fiddler's Fingers until the killer is caught, Ann realizes that the only way to prove her cousin's innocence is by snaring the murderer herself. The trap is set; with herself as bait, Ann's door creaks open in the night as a cloaked figure moves silently toward her bed....
Another period mystery, this one reminiscent of those old William Castle noir thrillers.  Who wouldn't be interested in finding out what makes fingers chuckle?  A solid four paws.
HOOKED ON A FELINE
MAGICAL CATS #13
SOFIE KELLY
BERKLEY; HARDCOVER 9/7/21
FIVE PAWS 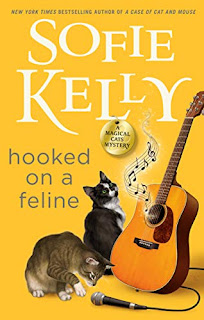 It's Summer in Mayville Heights, and Kathleen Paulson and her detective boyfriend Marcus, are eager to attend the closing concert of the local music festival. The concert is a success, but then one of the band members is discovered dead shortly after it. At first it’s assumed the death is a robbery gone wrong, but Kathleen suspects foul play—and she’s certain that she, along with her trusty side-cats, Owen and Hercules, can help solve the murder.Before his death, Kathleen had noticed the victim in the library researching his genealogy, and when she and Marcus take a closer look at the man's family tree, they begin to think a previous death of one of his relatives now seems suspicious. The more Kathleen thinks about it, the more this murder feels like it could be an encore performance. Kathleen and her cats will need to act fast and be very careful if they want to stay off of a killer's hit list.
We love, love, love this series and number 13 still does not disappoint.  We love Kathleen and the antics of both her magical cats...and the mystery isnt bad either!  Five Paws
DEATH OF A RED HOT RANCHER
A LOVE IS MURDER MYSTERY
BERKLEY; MMPB; 9/7/21
MIMI GRANGER
4 1/2 PAWS
Love meets murder in this new cozy mystery series set in a quirky romance bookstore, with a heroine to die for.Lizzie Hale may be the lucky owner of a successful romance bookshop, Love Under the Covers, but she's decidedly un-lucky in love. Though she's read almost every famous romance novelist, from Jane Austen to Nora Roberts, none have helped her figure out how to get—and keep—a man.But Lizzie has bigger problems to worry about. Like murder.
When Brody Pierce, swoon-worthy ranch owner and resident bachelor, is found stabbed through the chest, hearts were heard breaking all over idyllic Tinker's Creek. But when Lizzie's aunt is implicated in the murder, she's determined to clear her name. Lizzie quickly realizes that Brody was a hunk with many hidden 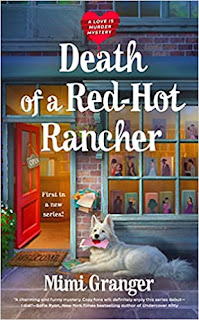 secrets, and she's soon leafing through a stack of suspects longer than Brody's list of lovers.With the killer still on the loose, Lizzie will have to find the truth before this act of passion ignites a fire she can't put out.
Points for the different premise; cozy meets rom-com.  Another promising first entry that we will be watching!  four and a half paws.
CLAWS FOR ALARM
A CAT CAFE MYSTERY
CATE CONTE
ST. MARTIN'S MMPB
FOUR STARS 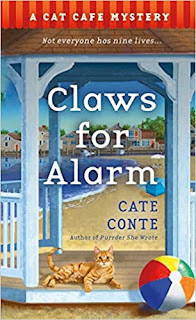 Maddie James has finally given in to her friend Katrina’s pleas to open up her cat cafe to more than ten felines: they’re now up to fifteen purring friends. In fact, JJ’s House of Purrs is making such a splash that she’s getting national attention. The East Coast Animal Rescue League is quite interested in the cafe, and so Maddie accepts a request to meet with Jillian Allen, the executive director. Jillian shows up at the cafe and asks Maddie if they can partner on a fundraiser to support the local rescue efforts―and she offers up her celebrity endorser and her celebrity cat to sweeten the deal. Maddie, caught up in the prospect, offers up her sister Val to help plan the event.But when Val shows up for a site visit at the venue, she finds Jillian strangled with a fancy cat leash―a piece of swag they were intending to use for the fundraiser―leaving Maddie with a lot of questions to answer. Was her death a tragic one-off event, or is there something more sinister going on? Maddie has to figure it out fast, before anyone else in the rescue community is jeopardized.
Have always been a JJ fan!  Good solid cozy. (Even if they did borrow my Nick and Nora title LOL.  No copyright on titles!!!!!!)  This was a july release from St. MArtin's and we are reviewing it because we feel it's worth a look!  Better late than never LOL.
Want to win one of ROCCO's review copies? Leave your  name and email address in our comments section.  One winner will be selected at random.  US entries only please!  Ends midnight, 9/30/21
Posted by ROCCO LOTEMPIO at 12:30 AM 11 comments: