Here are  my March cozy reviews! A murder in her quaint British bookshop drops American Gothic novelist Penelope Parish into her deadliest caper yet.Penelope Parish is ready to close the book on her amateur sleuthing—from now on, The Open Book’s writer-in-residence will be sticking to villains of the fictional variety while she puts the final touches on her new novel. But when an author is murdered inside the bookshop, all of Upper Chumley-on-Stoke goes on high alert. Now it’s up to Pen and the quirky citizens of Chumley to stop a killer and protect the charming British town she’s begun to call home.

Another good entry in this series.  We love the quirky characters!  four Paws!

FOUR AND A HALF STARS 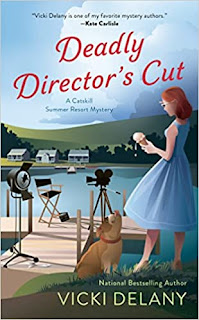 Daring resort manager Elizabeth Grady will need to think fast to bring a killer into the limelight in this charming 1950s set cozy mystery series.Famous director Elias Theropodous has chosen Haggerman’s Catskills Resort as a shooting location for his next film. It sounds glamorous to much of the staff, but resort manager Elizabeth Grady is less satisfied. Dealing with the ridiculous demands of the antagonistic director is bad enough, and his attempts to walk all over Elizabeth are making her feel like her position at the resort has been changed into a bit part. But when Elias is poisoned during a dinner at the resort, the future of the film and the resort itself are on the line. Between an aging movie star, a harried producer, and former victims of the deceased director’s wrath, Elizabeth has a full cast of suspects to examine, and she’ll need to investigate every lead to catch a killer.

The setting is reminiscent of Dirty Dancing but that's where the similarities end.  Vicki Delany is one of our favorite author and it seems she has anohter winner with htis series!  four and a half paws! 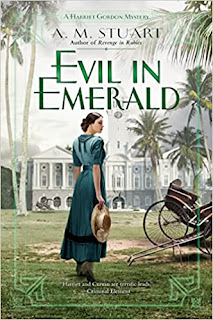 Craving a change of pace, Harriet Gordon, joins a local musical theatre production but when a fellow cast member is brutally killed, Harriet and Inspector Curran must turn the spotlight on murder in this all-new mystery from the author of Revenge in Rubies. Between working at her brother’s school and typing up Inspector Robert Curran’s police reports, Harriet Gordon has little time for personal pursuits and she has been enjoying the rehearsals for her role in the Singapore Amateur Dramatic and Musical Society’s latest production – Pirates of Penzance. But Harriet quickly discovers tensions run deep within the theatre company and when the leading man is found murdered, suspicions abound, exposing scandalous behavior as well as some insidious crimes.Inspector Curran once again turns to Harriet for help with this difficult case, but his own life begins to unravel as a mysterious man turns up on his doorstep claiming to know more about Curran’s painful past than he himself does. And after the one person he has always counted on delivers him some devastating news, the line between his personal and professional life begins to blur. Now, more than ever, Curran needs Harriet’s steadfast assistance, and when another cast member meets a violent end, Curran and Harriet will have to close in on a killer determined to make this case their final curtain call.

We find this turn of the century series surprisingly good.  the characters are multi-dimensional and the plots challenging. Especially loved the  mystery surroundng Inspector Curran! Four paws.

Posted by ROCCO LOTEMPIO at 8:54 AM 5 comments: