In Horror movies, the final girls are the ones left standing when the credits roll. They made it through the worst night of their lives…but what happens after?

Like his bestselling novel The Southern Book Club’s Guide to Slaying Vampires, Grady Hendrix’s latest is a fast-paced, frightening, and wickedly humorous thriller. From chain saws to summer camp slayers, The Final Girl Support Group pays tribute to and slyly subverts our most popular horror films—movies like The Texas Chainsaw Massacre, A Nightmare on Elm Street, and Scream. Lynette Tarkington is a real-life final girl who survived a massacre. For more than a decade, she’s been meeting with five other final girls and their therapist in a support group for those who survived the unthinkable, working to put their lives back together. Then one woman misses a meeting, and their worst fears are realized—someone knows about the group and is determined to rip their lives apart again, piece by piece. But the thing about final girls is that no matter how bad the odds, how dark the night, how sharp the knife, they will never, ever give up.
“A great read…[Hendrix] excels at writing horror humor… His characters are funny and real, though at least one will definitely lose a limb at some point…Though the final girls’ plight has all the scares of great horror fiction, there is an element of truth in their situation that will be recognizable to anyone who has experienced real trauma.” – The New York Times“The Final Girl Support Group is funny, scary, and a roaring good time. Grady Hendrix puts his own spin on final girls and I loved it.”—Samantha Downing, USA Today bestselling author of My Lovely Wife"Take slasher movie adoration, critique, and satire, mix with compelling, flawed characters and neck-breaking plot twists, and drop it all into an industrial blender with large blades. Voilà, you now have Grady's maniacally clever and compulsively readable The Final Girl Support Group."—Paul Tremblay, national bestselling author of Survivor Song“A wildly entertaining romp through the conventions of horror’s slasher film subgenre…Hendrix masterfully evokes the paranoid existences of his diverse cast in the aftermath of their traumatic ordeals, and he so explicitly details the massacres and fictional film sagas that grew out of them that readers may believe them to be real. The result is a wonderfully suspenseful and darkly comic novel that cleverly subverts popular culture. Horror fans will be wowed.”—Publishers Weekly (starred review)

Grady Hendrix is an award-winning novelist and screenwriter living in New York City. He is the author of Horrorstör, My Best Friend’s Exorcism (which is being adapted into a feature film by Amazon Studios), We Sold Our Souls, and the New York Times bestseller The Southern Book Club’s Guide to Slaying Vampires (currently being adapted into a TV series). Grady also authored the Bram Stoker Award-winning nonfiction book, Paperbacks from Hell, a history of the horror paperback boom of the '70s and '80s.
Available now at Amazon and Barnes and Noble!
Posted by ROCCO LOTEMPIO at 12:30 AM 5 comments:

Meow!  Here are  my July Reviews!

First up an old favorite series! 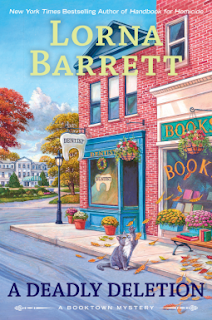 Tricia Miles has just received a second marriage proposal within fifteen minutes. The first was from her friend with benefits, Marshall Chambers, and the second from her ex-lover, police chief Grant Baker. Tricia's got some serious thinking to do.She's still weighing her options when she hears the sound of an engine roaring down Main Street. It's a big white pickup truck that aims for and hits Marshall as he's walking back to his apartment. Tragically, he's killed, leaving Tricia feeling bereft and guilty. She retreats to her sister, Angelica's, apartment to wait for Baker to update her on what happened. While there, Tricia takes Angelica's dog out for a comfort call behind the building, and the same white pickup roars up the alley and just misses hitting Tricia.Still shaken by that news, Tricia returns to Haven't Got a Clue and is met by federal marshal Kirby, who tells her that Marshall had been in the Federal Witness Protection Program. Everything Marshall told Tricia was a lie—in particular, that he was a widower. Was his death an act of revenge?Tricia's on the hunt for a killer, and it seems like she might be next on the list.
This has become one of our favorite series. We love to follow the adventures of Tricia and Anjelica and see what sort of trouble Trish always gets into.  Loved the fact that Baker finally came to his senses and proposed!  Can't wait to see where the next installment takes Trish!  Five paws!!!!
MOONSHINE SHACK MURDER
DIANE KELLY
BERKLEY; MASS MARKET PAPERBACK
JULY 6, 2021
FOUR STARS 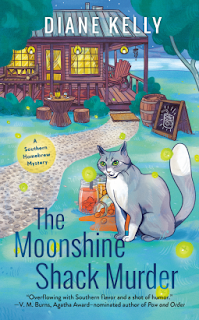 In this intoxicating new cozy mystery series, the future for modern-day moonshiner Hattie Hayes looks bright--until death darkens the doorstep of her Moonshine Shack.The Hayes family has made moonshine in Chattanooga since the days of Prohibition, and Hattie is happy to continue the tradition, serving up fun, fruity flavors in mason jars for locals and tourists alike. All signs indicate her new 'shine shop will be a smashing success. What's more, mounted police officer Marlon Landers has taken a shine to Hattie. For the first time ever, the stars seemed to have aligned in both her work and romantic life. But when a body ends up on her store's doorstep alongside a broken jar of her Firefly Moonshine, it just might be lights out for her fledgling business.The homicide detective can't seem to identify the person who killed the owner of a nearby bar. The only witness is Hattie's longhaired gray cat, and Smoky isn't talking. When the detective learns that the victim and Hattie had a heated exchange shortly before his murder, she becomes her prime suspect.Lest Hattie end up behind bars like her bootlegging great-grandfather a century before, she must distill the evidence herself and serve the killer a swift shot of justice.
This is definitely different - a sleuth who  makes moonshine!  New series that's definitely worth a look! Four paws.
A FATAL FOOTNOTE
AN OPEN BOOK MYSTERY
BERKLEY; MASS MARKET PAPERBACK
JULY 6, 2021
MARGARET LOUDEN
FOUR PAWS 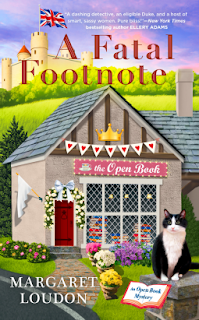 Penelope Parish will need to use every trick in her quaint British bookshop to unravel a murderous plot that threatens to ruin a ducal wedding.The wedding of the Duke and Duchess of Upper Chumley-on Stoke has all the makings of a fairy tale, complete with a glowing bride and horse-drawn carriage. But it wouldn't be much of a story without a villain, and as American Gothic novelist Penelope Parish is coming to learn, happy-ever-afters are as fraught in this charming British town as they are in her books.When the Duke's former girlfriend is found murdered at the reception it's up to Penelope and her newfound family at the Open Book bookshop to catch the killer before they strike again.
Second in series and a good follow up to #1, Murder in the Margins!  Definite four paws.
SYNCHRONIZED SORCERY
JULIET BLACKWELL
WITCHCRAFT MYSTERY
BERKLEY; MASS MARKET PAPERBACK
JULY 6, 2021
FOUR AND A HALF PAWS 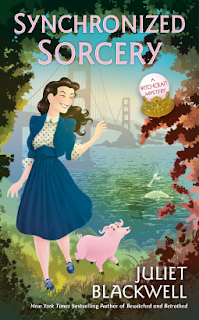 As witch and vintage store owner Lily Ivory steps into her new role as leader of the Bay Area's magical community, she's faced with a mysterious death of magical proportions...Strange things are happening in Lily Ivory's San Francisco. First, she finds a vintage mermaid costume which dates from the 1939 San Francisco's Treasure Island World's Fair – and which gives off distinctly peculiar vibrations. Next, she stumbles upon a dead man in the office of her predecessor, and as the community's new leader, she feels compelled to track down the culprit. Just when Lily thinks things can't get any stranger, a man appears claiming to be her half-brother, spouting ideas about the mystical prophecy involving San Francisco and their family...When the dead man is linked to the mysterious mermaid costume, and then yet another victim is found on Treasure Island, Lily uncovers ties between the long-ago World’s fair and the current murders, and begins to wonder whether the killer might be hiding in plain sight. But unless Lily can figure everything out in time, there may be yet another body floating in San Francisco Bay.
Who doens't love a good mystery with elements of the supernatural, and a Lily Ivory one in particular?  This one is no exception!!!!!  Four and a half paws!
Posted by ROCCO LOTEMPIO at 12:30 AM 11 comments: