Here are my December Cozy Reviews! 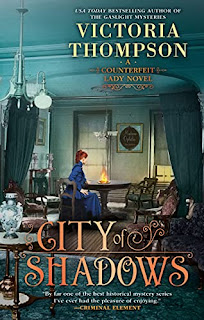 In this all-new Counterfeit Lady Novel from USA Today bestselling author Victoria Thompson newlywed Elizabeth Miles must use her unlawful skills  to expose a dangerous charlatan. Elizabeth Miles Bates has returned from her honeymoon with Gideon and is taking great pride in having completely forsaken her disreputable past.  Then her friend, Anna Vanderslice, begs her to use her talents to save her widowed mother from a unscrupulous medium. Since the war and the flu epidemic left so many families in mourning,  séances have come back into vogue as desperate families long to communicate with their loved ones. Anna's mother has been attending séances in hopes of connecting with her son, David, who died of influenza.  Anna had thought it a heartbreaking but harmless activity but she's just learned that Mrs. Vanderslice is paying the medium ever-increasing sums of money in her eagerness to make contact. Since David's death has already caused Anna and her mother financial hardship, Mrs. Vanderslice's obsession is in danger of ruining them.Madame Ophelia is working with a group of con artists to fleece as many grieving New Yorkers as possible before moving on to another city. Several of Mrs. Vanderslice's friends, as well as some of Gideon's clients, have already been victims.  Elizabeth knows that simply exposing the medium as a fraud will not be enough to recoup the stolen money;  the only way is to con the medium and her cohorts. But will Elizabeth's family help her when it means betraying other con artists?  Elizabeth recruits Gideon, her aunt Cybil and her partner, Zelda to lend a hand. Can Elizabeth and her gang of amateurs fool the professionals?  Or will speaking to the dead lead to deadly consequences?
A good series for fans of both mystery and historical novels!  Four paws!
Stitched in Crime
Emmie Caldwell
A Craft Fair Knitter Mystery #2
Berkley; Paperback; 12/7/21
Four stars 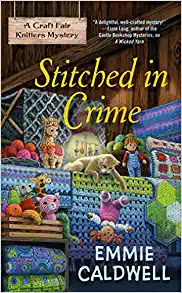 When murder pierces the fabric of the close-knit Crandalsburg Craft Fair, it's up to the Ninth Street Knitters to make a killer slip their stitch.The Craft Fair may have hit a few snags lately, but knitting enthusiast Lia Geiger is hopeful her quiet life will return to its usual patterns in no time. Her daughter has officially moved back home, and sure, the house is a little crowded with Hayley's take-home work from the alpaca farm, but that's a price Lia will happily pay. All seems well until Cori Littlefield, a new vendor with a gift for crochet, is found dead, sending shock waves through all of Crandalsburg.What begins as a tragic accident turns into a snarled spool of lies that only the combined efforts of the Ninth Street Knitters can untangle. When Lia makes a connection between Cori's death and a decades-old murder, it's up to her to weave together the clues and find the truth.
Knitting mysteries are always very popular and this second in the series is an intriguing entry.  Four paws!
Pride, Prejudice and Peril
Katie Oliver
A Jane Austen Tea Society Mystery
Berkley; Paperback; 12/7/21
4 12 stars
Jane Austen meets reality TV and murder in this quirky cozy mystery—the first in a new series!Phaedra Brighton is perfectly content with her life of lecturing college students, gossiping with her best friends, and dreaming of Mr. Darcy. As a young, respected (if somewhat peculiar) English professor, her expertise lies in all things Jane Austen—but she knows that the closest she'll ever get to being a real-life Elizabeth Bennet is in her dreams.When Who Wants to Marry Mr. Darcy, a new reality TV show, starts filming at her best friend Charlene's estate, Phaedra is intrigued. And when the producer asks her to lend her Austenian knowledge as a consultant on the show, she's over the moon. But on the first day of filming, when Charlene's new husband is found electrocuted and Charlene herself is accused of the crime, Phaedra comes crashing back to reality.With murder on the syllabus and her best friend in dire straits, there's no Mr. Darcy around to help Phaedra—she'll have to get to the bottom of this mystery herself.
This is an intriguing premise for a series, combining classic literature with reality TV.  Could anything be more opposite?  It works, though. Very different. Reminded me in a way of the Hallmark mystery series Murder 101. ROCCO recommended!  four and a half paws!
Absence of Mallets
Kate Carlisle
A Fixer Upper Mystery
Berkley/ Paperback/ 12/7/21
Five stars 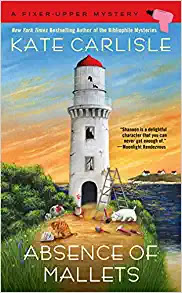 Contractor Shannon Hammer steels her nerve to pin down a killer in the latest Fixer-Upper Mystery from the New York Times bestselling author of Premeditated Mortar. . . .Shannon could not be happier that her hunky thriller-writing boyfriend, Mac, has moved in, and it is a good thing they are living together because they are both busier than ever. Mac is hosting writing retreats at his now vacant lighthouse mansion, while Shannon and her crew build Homefront, a quaint Victorian village of tiny homes for veterans in need. Mac’s latest guests are proving to be a handful though, and Shannon has heard some grumbling from the luminaries of Lighthouse Cove about her latest passion project. But nothing can throw a wrench in their plans except a malicious murder.When one of Shannon’s new friends is found brutally bludgeoned with a mallet near the lighthouse on Mac’s property, the couple hammers out a suspect list and searches for a motive. As they drill deeper for clues, more violence strikes and a new victim winds up in a coma. The pressure is on, and Shannon and Mac will have to move fast to find an unhinged killer dead set on demolishing anyone who gets in their way. . . .
Another series that only improves with age.  Shannon is an erstwhile sleuth, ditto her significant other Mac, and we always enjoy seeing how she and Mac put the pieces together to come up with the killer.  Discovered this series after seeing the Hallmark movie! Five paws!!!!!!
Curse of Salem
Kay Hooper
A Bishop Special Crimes Unit Mystery
Berkley/HC/12/27/21
Four Stars 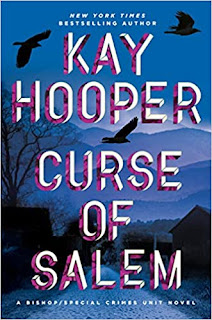 New York Times bestselling author Kay Hooper is back with a brand new thrilling paranormal suspense novel in the Bishop/Special Crimes Unit series.
The small town of Salem has been quiet for months—or so Bishop and his elite Special Crimes Unit believe.  But then Hollis Templeton and Diana Hayes receive a warning in Diana's eerie "gray time" between the world of the living and the realm of the dead that a twisted killer is stalking Salem, bent on destroying in the most bloody and horrifying way possible the five families that founded the town. The stakes are high, especially for new friends Nellie Cavendish and Finn Deverell, both members of the Five, and this time Bishop and his wife Miranda will lead the team to hunt down a vicious killer and uncover a dark and ancient curse haunting Salem.
This is a bit darker than the usual cozy, but still an excellent read for paranormal and mystery fans!
Posted by ROCCO LOTEMPIO at 11:30 PM 1 comment: