Merow, welcome to the spooky Fall season with this bunch of cozies from Berkley!

The great Gingerbread Dog & Cat House competition has come to Wagtail, along with another murder to solve for Holly and her supersmart Jack Russell terrier Trixie in the New York Times bestselling Paws & Claws series by Krista Davis!

Visitors are arriving in droves to spend Thanksgiving in the mountains of pet-friendly Wagtail, Virginia. Many of them are bringing dog and cat gingerbread houses to enter in the contest that will be held in the new convention center. Wagtail resident Orly Biffle bequeathed the land to the town in his will, provided that they not cut down the grand old oak tree on the property.

When a bulldozer churns up some roots, the tree falls over on its own accord revealing a body inside the trunk! Initially, the townsfolk suspect the murderer was Orly himself, but it soon becomes clear that someone is trying to keep the truth under wraps. Trixie and Twinkletoes now have to help Holly sniff out some suspects and leash a conniving killer.

Really, anything wth Krista Davis' name on it is sure to be a hit. We love the Domestic Diva series (thank God Kensington had the good sense to pick it up) and we love this one. Who doens't enjoy solving a mystery in Wagtail?  Plus Trixie and Twinkletoes make excellent sleuths!!!!   Five Paws.

Librarian Kathleen Paulson is always willing to help a friend, but to save one from a wrongful arrest, she’ll need magical backup from her affectionate cats in the newest installment of this New York Times bestselling series.

Baker Georgia Tepper has been hired to provide delicious and spooky cupcakes for the Reading Buddies Halloween Party at the library, and she and Kathleen are meeting to finalize the menu of festive confections. Unfortunately, once Georgia’s former mother-in-law ambushes her at the library and threatens Georgia with legal action, the afternoon of fun is soured.

When Georgia’s litigious in-law is later found dead and the friendly baker is implicated, Kathleen is eager to help prove her innocence. Luckily, Kathleen and her intrepid magical cats, Hercules and Owen, have solved their fair share of mysteries. As a result, she knows that in life as well as crime solving, it is all relative, but with hard work, she can make sure the right criminal is booked.

We love this series, we love Kathleen but most of all we love the cats! Always a treat to see how Hercules and Owen help their human solve a perplexing mystery. Another series we never tire of.  Five Paws.

THE GHOST AND THE STOLEN TEARS by Cleo Coyle (Berkley Mass Market Original; on sale October 4, 2022) |

With the help of her gumshoe ghost, bookshop owner Penelope Thornton-McClure sets out to clear an innocent woman of a shocking crime in this all-new entry in the “utterly charming” (Mystery Scene) Haunted Bookshop Mysteries from New York Times bestselling author Cleo Coyle.

Living out of her van and teardrop trailer, Norma is a modern-day nomad.  Jovial, wise, and scrupulously honest, she’s become an uplifting presence in the little town of Quindicott, Rhode Island, where bookseller Pen is thankful to have her part-time help. But it’s Norma’s other job, working as a housekeeper at the Finch Inn, that gets her into terrible trouble. Norma is accused of stealing jewels from a guest’s room: the legendary Valentino Teardrops, an antique necklace and earring set, inherited by a young socialite. Pen doesn’t believe Norma is guilty of the crime—though the evidence is distressingly strong. And when the spirited Norma vanishes before her arrest, Pen turns to another spirit…

Cleo Coyle and company have anohter winner with this companion series to their coffee shop sereis.  Four and a half paws! 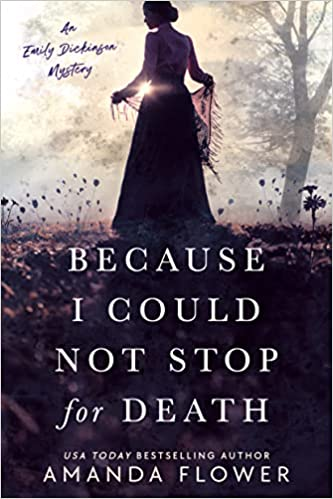 Emily Dickinson and her housemaid, Willa Noble, realize there is nothing poetic about murder in this first book in an all-new series from USA Today bestselling and Agatha Award–winning author Amanda Flower.January 1855 Willa Noble knew it was bad luck when it was pouring rain on the day of her ever-important job interview at the Dickinson home in Amherst, Massachusetts. When she arrived late, disheveled with her skirts sodden and filthy, she'd lost all hope of being hired for the position. As the housekeeper politely told her they'd be in touch, Willa started toward the door of the stately home only to be called back by the soft but strong voice of Emily Dickinson. What begins as tenuous employment turns to friendship as the reclusive poet takes Willa under her wing. Tragedy soon strikes and Willa's beloved brother, Henry, is killed in a tragic accident at the town stables. With no other family and nowhere else to turn, Willa tells Emily about her brother’s death and why she believes it was no accident. Willa is convinced it was murder. Henry had been very secretive of late, only hinting to Willa that he'd found a way to earn money to take care of them both. Viewing it first as a puzzle to piece together, Emily offers to help, only to realize that she and Willa are caught in a deadly game of cat and mouse that reveals corruption in Amherst that is generations deep. Some very high-powered people will stop at nothing to keep their profitable secrets even if that means forever silencing Willa and her new mistress....

Amanda Flower takes us on a whirlwind of a mystery!  Enjoyed it even tho period mysteries aren't really my thing. four paws

We have a copy of Krista Davis' THE GOOD DOG'S GUIDE TO MURDER for one lucky commenter!  Just leave your name and email address in our comments section.  US entries only, please.  One winner will be selected at Random by ROCCO's brother Maxx!  Contest closes midnight, September 16!