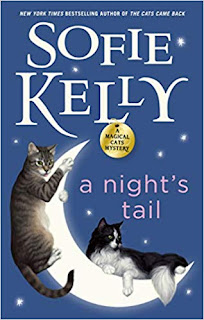 In the charming town of Mayville Heights, librarian Kathleen Paulson and her two cats pounce on clues to catch a killer, in the eleventh installment of this New York Times bestselling series.Spring is coming to Mayville Heights, and Kathleen’s brother, Ethan, has arrived in town with his band, The Flaming Gerbils. But not everything goes as scheduled when one of Ethan’s bandmates gets into a fight with a man interested in investing in the town. When the businessman’s body is later found, Ethan’s friend is implicated in the crime.
Kathleen wants to help her brother by solving the case, but she has no shortage of suspects from which to choose. Prior to his death, the investor was fighting like cats and dogs with lots of people. If this librarian wants more than a whisker’s chance of solving the case, she will need to rely on her trusty feline sidekicks, Owen and Hercules.

I love this series, and not just because of the cats, although they are a big draw!  I'm fond of Kathleen, her polceman boyfriend, and all the quirky characters in the town of Mayville Heights, which to  me is quickly becoming another Cabot Cove.  Devotees of this series will enjoy, as will new converts.  Five Paws. 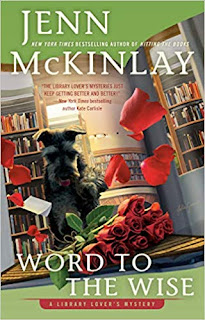 It's no-holds-barred murder, in the latest page-turning Library Lover's Mystery from the New York Times bestselling author of Hitting the Books.
Lindsey Norris is finally getting married to the man of her dreams—but it's not all roses for Briar Creek's beloved library director, as gardening enthusiast and town newcomer Aaron Grady gives the term “book lover” a whole new meaning. Inappropriate looks and unwelcome late-night visits to Lindsey's house have everyone from the crafternooners to Lindsey's fiancé, Sully, on edge.
When Grady's dead body is found staged outside the library and all the clues point to Sully, Lindsey knows it's up to her to dig through the hidden chapters of Grady's previous life to find the real culprit and clear Sully's name. But becoming a thorn in the killer's side is not without its consequences, and the closer Lindsey gets to the truth, the more determined the murderer is to make her just a footnote


A "new to me" series but an old favorite for many others.  I enjoyed this cozy mystery and will definitely be picking up more in the series!  four paws!!!! 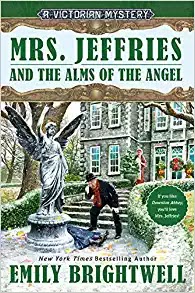 Mrs. Jeffries fans will be delighted with her newest adventure, which has her and Inspector Witherspoon joining forces to solve the murder of an active church member who, on the surface, appeared to be beloved by all.  When they dig deeper, however, things are not a they appear, and they soon find themselves with a plethora of suspects with motives for wanting the supposedly kindly woman dead.  another good entry in this long running series.  four stars 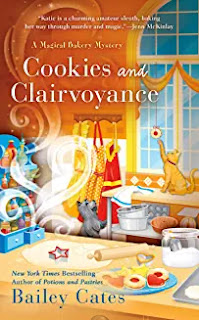 If you enjoy baking with a dash of the supernatural, this is the series for you!  Cates has created a wonderful world where baking and witchcraft combine, and she continues it in this eighth entry!

Hedgewitch Katie Lightfoot is juggling wedding preparations, a visit from her father, and home renovations on top of her long hours at the Honeybee Bakery, where she and her aunt Lucy imbue their yummy cookies and pastries with beneficial magic. But when firefighter Randy Post is accused of murdering a collector of rarities, and his prints are on the statue that was used to kill the man, Katie steps in.
Randy is not only Katie's fiancé's coworker, but also the boyfriend of fellow spellbook club member and witch Bianca Devereaux. Bianca and Declan are both sure Randy is innocent, and so is Katie. However, to prove it she'll have to work with ornery detective Peter Quinn again—and this time around he knows she's more than your everyday baker. 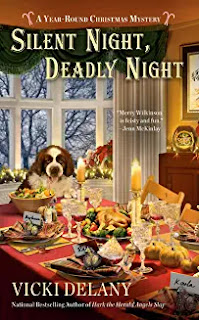 Residents of Rudolph keep the spirit of Christmas alive year-round—but their joy is threatened when a group of grinches visits the town, in the charming fourth installment of the Year-Round Christmas series.It's the week before Thanksgiving, and Merry Wilkinson, owner of Mrs. Claus's Treasures, is preparing for a weekend reunion of her mother's college friends. But when the group of women comes into Merry's shop, Merry is met with frosty attitudes and cold hearts. The women argue amongst themselves constantly, and the bickering only intensifies after one of the friends is poisoned. With her father's role as Santa in danger due to his proximity to the crime, Merry will need to use all of her investigative gifts to wrap this mystery up and save Santa and her favorite holiday.

What better, than to combine two of my favorite things, Christmas and mysteries?????  I have been a big fan of this series since the first book and this one is just as enjoyable.  A ROCCO recommend!

Brother Maxx will choose one at random; to enter, leave your name and email address in our comments section. For extra entries, mentoin the contest and this blog on Facebook and Twitter!  One winner will be selected at random.  US ENTRIES ONLY, PLEASE.  Contest ends midnight, September 21.
Posted by ROCCO LOTEMPIO at 4:12 PM 21 comments: