New York City, 1947: For years, Holly Quick has made a good living off of murder, filling up the pages of pulp detective magazines with gruesome tales of revenge. Now someone is bringing her stories to life and leaving a trail of blood-soaked bodies behind. With the threat of another murder looming, and reluctant to go to the police, Holly turns to the best crime-solving duo in or out of the pulps, Willowjean “Will” Parker and her boss, famed detective Lillian Pentecost.

The pair are handed the seemingly-impossible task of investigating three murders at once without tipping off the cops or the press that the crimes are connected. A tall order made even more difficult by the fact that Will is already signed up to spend her daylight hours undercover as a guileless secretary in the hopes of digging up a lead on an old adversary, Dr. Olivia Waterhouse.

But even if Will is stuck in pencil skirts and sensible shoes, she’s not about to let her boss have all the fun. Soon she’s diving into an underground world of people obsessed with murder and the men and women who commit them. Can the killer be found in the Black Museum Club, run by a philanthropist whose collection of grim murder memorabilia may not be enough to satisfy his lust for the homicidal? Or is it Holly Quick’s pair of editors, who read about murder all day, but clearly aren’t telling the full story?

With victims seemingly chosen at random and a murderer who thrives on spectacle, the case has the great Lillian Pentecost questioning her methods. But whatever she does, she’d better do it fast. Holly Quick has a secret, too and it’s about to bring death right to Pentecost and Parker’s doorstep.

PRAISE FOR MURDER UNDER HER SKIN:

“A delight. . . It’s a pleasure to watch [Pentecost and Parker] sifting through red herrings and peeling secrets back like layers of an onion, all while revealing even more of themselves without guilt or shame. Just like his mystery-writing ancestor [Rex Stout], Spotswood understands that the detective story should be sound, but spending time with unforgettable characters is paramount.”—The New York Times Book Review

"Will’s slangy first-person narrative is captivating, and fans of circus life, such as it was, will enjoy this tale, as will followers of the 1940s hard-boiled detective genre, considerably enlivened here by having two no-nonsense women do the sleuthing."—Booklist

"Parker narrates the novel in a voice shot through with not only guts but wry humor.... The relationship between Pentecost and Parker grows ever more fun with time. So where will they go next? For me, it doesn’t matter as long as I get to go along."—BookReporter

"Just as vibrant and compelling as [Fortune Favors the Dead]. . . The best things about this novel/series are Spotswood’s clever prose and dialogue, which so perfectly calls to mind the time period and the very colorful characters he’s crafted. . . Spotswood is quickly climbing the ranks of my favorite current authors, securing himself a spot on my instant-order list, and his Pentecost and Parker mysteries are a solid recommendation to any fans of historical fiction, lady investigators, or mysteries centered around queer characters."—Criminal Element

"Set amid the glitz and glimmer of showbiz, [Murder Under Her Skin] expose[s] the corruption and abuse that exists after the shine of spotlights go out. But even more than that, [it examines a critical period] during which women's roles were shifting as they demanded more freedoms. . . As they work the case, Will and Lillian find the world in flux around them, which Spotswood ably explores without distracting from the central mystery. . . None of the characters in this mystery quite know how to cope with these seismic cultural changes, setting Murder Under Her Skin apart from more simplistic stories set in the same time period."—BookPage

"Just like the first book in the series, Murder Under Her Skin is a fun and engaging read with a whodunit that keeps you guessing and entertained."—Historical Novel Society

Posted by ROCCO LOTEMPIO at 11:30 PM No comments: 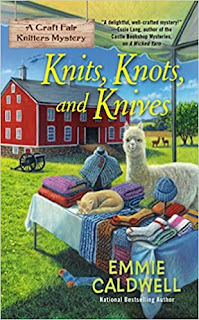 It will take the Ninth Street Knitters all the sleuthing skills they have to untangle the threads of a dyed-in-the-wool killer.For once things seem to be running smoothly for knitting enthusiast Lia Geiger. Her daughter is living on her own and happy with her new job on the alpaca farm. Plus, Lia and her Ninth Street Knitters have been knitting for the Civil War reenactment being held on the grounds next to the Crandalsburg Craft Fair. It’s all fun and battle games until one of the “injured soldiers” turns out to be the very real victim of a murder, and Lia’s friend and neighbor falls under deep suspicion. Suddenly, the good folks of Crandalsburg are spinning all kinds of yarns and pointing fingers at one another. Lucky for Lia, she has the combined wits of the Ninth Street Knitters to help her ply the truth from this crafty killer.
An entertaining mystery!  The clues are carefully woven in, drawing the reader in.  Recommended for chilly nights when you want to snuggle up with a good book!  4 Paws!
CITY OF FORTUNE
VICTORIA THOMPSON
BERKLEY/HARDCOVER/12-6-22
FOUR STARS 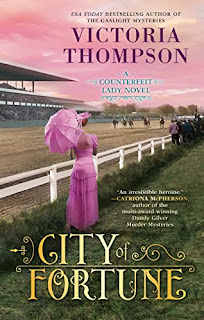 When a day at the races reveals sabotage and subterfuge, Elizabeth Miles must use every ounce of her craftiness to even the score in this all-new Counterfeit Lady novel from USA Today bestselling author Victoria Thompson.Wealthy but uncouth Sebastian Nolan has invited his lawyer, Gideon Bates, and his lovely new wife, Elizabeth, to attend the famous Belmont Stakes. Nolan is anxious for Gideon and Elizabeth to help his daughter, Irene, acquire a bit of polish, now that his venture into thoroughbred racing has allowed them entry into society. He is also hoping to find her a rich potential suitor. Elizabeth is not exactly the society girl Nolan believes her to be, but she is eager to attend the races. Her con artist family has made a lot of money at racetracks, although not from betting on the horses, and she enjoys the excitement of the track.Irene Nolan seems more interested in horses than husbands, and she jumps at the chance to show Elizabeth her horse, Trench, and introduce her to his rider, Cal Regan. Elizabeth soon realizes there is more than just a working relationship between Irene and Cal. But she also knows that Irene’s father would never allow his only daughter to marry a jockey. When Cal takes a terrible tumble injuring both himself and Irene’s beloved Trench, Elizabeth and Gideon learn that the mishap was not simply bad luck—the horse and rider are victims of sabotage.  It turns out that Sebastian Nolan has more than a few skeletons in his closet and someone is out to get their long sought-after revenge. Elizabeth knows that to help Irene and Cal, she is going to need some help in creating the quintessential con. With the ever honest Gideon at her side, she enlists those closest to her to come up with a scheme that will either ensure young Irene and Cal a first-place finish or have disastrous consequence. . . .
As with all of victoria thompson's series, a finely crafted mystery that is sure to dleight both new readers and old fans.  Four stars.
Posted by ROCCO LOTEMPIO at 11:33 AM No comments: