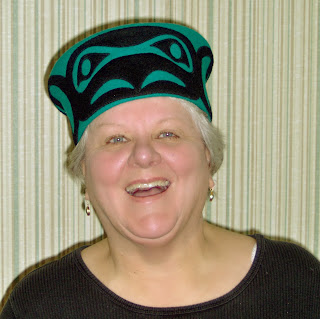 Mary Monica Pulver sold her first short story to Alfred Hitchcock's Mystery Magazine in 1983.  Her first novel, Murder at the War, appeared from St. Martin's Press in 1987. Four in that series followed.  In 1992, the first of six medieval Tales, written in collaboration with Gail Frazer as Margaret Frazer, appeared.   In 1998, writing as Monica Ferris, she began writing a new series for Berkley featuring a needleworking sleuth named Betsy Devonshire.  The first was called Crewel World, the eighteenth, to appear in February, is A Drowning Pool.

To learn more, go to Monica-Ferris.com.


R:  Welcome Monica! Tell us a bit about yourself and how you became interested in writing.

My mother was a voracious reader and my father was a great story-teller, so I think that combination very naturally led to my career as a novelist.  I’m the oldest of six children, I grew up in Illinois and Wisconsin.  I joined the Navy out of high school, in six and a half years I served at Bainbridge, Maryland; Alameda, California; and London, England.  I was trained as a journalist, and had lots of adventures (I could write a book).  Back home I attended the University of Wisconsin at Madison, joined the Society for Creative Anachronism (I DID write a book), married and moved to Minneapolis.

R: Tell us about your latest release in your Betsy series.

The current title is And Then You Dye, but A Drowning Spool is coming in February.  Both are entries in the Betsy Devonshire needlework series.  Both follow the series’ template of a person under suspicion of murder who comes to Betsy with a plea that she clear his or her name.  But each has an un-similar twist at the end.

R: your main character is fond of needlepoint. Is this something you also enjoy? How did you decide on this as a career for your sleuth?

This series was the idea of my then-editor at Berkley.  I had broken off a collaboration with Gail Frazer (we were writing the Dame Frevisse medieval series), with Gail continuing the series alone, and I was casting around for a new idea when my agent contacted me with a message from my editor about writing a needlework series.  I was so flattered to be asked that I accepted at once, and only later discovered I didn’t know enough about needlework to carry off the heroine I invented.  So I murdered her and put her ignorant sister in the role.  As I learn, so does Betsy, though she’s pulling ahead.  I have come to love and admire the needle crafts, especially needlepoint and punch needle and knitting.  I’m trying to learn crochet, have given up on Hardanger, and struggle with counted cross stitch – though that last has the most gorgeous results!

R:  From your website photos, it appears you have a fondness for hats.  Is this a hobby of yours and how did it come about?

I was attending one of the early Malice Domestic conventions, where we dressed up for a fancy tea party.  A vendor was offering antique clothing and one of her hats was a match for the costume I was wearing.  Many people complimented me on the hat, so I decided to get another one, and then another, and another . . .  I have around forty hats now.  I love the way they “complete” an outfit, and I feel grown up and sophisticated wearing them.

The search for an agent is complicated and can be heart-breaking, but once you find a good one, her value is above rubies.  My first good agent was recommended to me by a fellow author – she kindly recommended me to the agent, as well.  I was glad to fire my previous agent (whom I think was lying to me about what he was doing), and Sally sold my first novel to the first editor at a prestigious publishing house she offered it to, because she knew the editor was looking for exactly the kind of novel I had written.  She sent me a post card telling me it was sold and I had to sit down and try to remember how to breathe when I read it.

Research is key for me.  Research writes about half of each novel, if not more.  The writers’ rule is, write what you know; but I’m like Rikki-Tikki-Tavi, Kipling’s mongoose, whose motto is, “Go and find out.”  Fortunately, I’m interested in everything, from how to make beer to clever ways to kill people.

How lazy I am.

Oh, Lord!  The list of crazy deeds is long.  I tend to commit to projects without thinking too much about consequences.  I enlisted in the Navy right out of high school, I extended my enlistment for two years so I could be assigned to London – but those turned out to be good decisions.  While in the Navy and stationed at an out-of-the-way place, a friend and I sneaked over to the stables late one night, saddled two horses, and rode them around the base.  It’s interesting to ride horses in the dark; they barely lift their feet and the ride is very smooth.  My horse thought it was fun, his kept balking and nearly got us caught when the shore patrol drove by.  Trying to sneak them back into the barn we stumbled (literally) over a row of water pipes strewn on the ground and created a heck of a row, but miraculously didn’t wake the people in the house.  I had to hang onto the stirrup flap to keep from falling down laughing.  That was crazy - and stupid.  Years later, somewhere around 1977 I joined the Society for Creative Anachronism – which is a pretty crazy outfit.  But that was a good decision, too.  (See Murder at the War by Mary Monica Pulver – me.)

I think my novels, like all traditional mysteries, are comfort reads.  They are about ordinary, often likable, people caught up in an ugly event – but at the end, justice happens and order is restored.  Like when you learn a new word and then see it everywhere, reading about things turning out all right reminds the reader that in real life, most things turn out all right, too.

I’m starting the next Betsy Devonshire mystery, currently titled A (or The) Needle Case.  I’ve been watching American Pickers and am intrigued by those people who fill their houses, garages, barns, sheds, even bought-for-the-purpose used school buses with stuff.  These people aren’t hoarders, they don’t keep garbage, they go out and buy things, bicycles and movie theater marquees and oil cans.  Why? So I have invented Tom Riordan to explore that a little bit.

Both.  I write a synopsis (required by my publisher), which I treat as a starting point, and fairly usually depart from it by Chapter Four.  But the solution remains – I need to know whom to point at as my culprit going in.  What often happens is, I do the setup, get Betsy involved, then just follow her around, writing down what she does and says.

I’m learning more about numismatism (coin collecting), and have just decided to continue adding to a collection of medieval English silver hammered coins I gathered years ago – I have one from every reign between William I and Elizabeth I, so will start looking for a good one of James I.  I’m on the Vestry of my Episcopal Church and was recently elected to the Board of the co-op we live in, and am finding both more complex than I anticipated.  I have taken up golf and love it, though I’m not very good at it.  And I’m very interested in crows.

Steak or salad?  Salad – I make a killer salad.

Favorite Drink?  Diet Squirt, though I am also fond of Schells Shocked (a grapefruit flavored beer!), and Arnold Palmers (mix of iced tea and lemonade).  Once in awhile I like a Bloody Mary.

Favorite Book?  That’s really tough.  I worship Donald E. Westlake’s The Hot Rock (and love the rest of the Dortmunder series, especially Drowned Hopes) and all of Terry Pratchett’s Discworld novels.  My own special “comfort read” is Ngaio Marsh’s Overture to Death.

If I had just one wish, it would be to win the lottery – though I rarely buy a ticket!

If I could trade places with anyone in the world, it would be Betsy Devonshire.

Thanks for a great interview, Mary Monica!

Here are all the places you can find out about Monica Ferris!

If anyone can come up with a title I can use for the Betsy Devonshire series, I’ll send them a specially-autographed copy of the book when it comes out.  The title has to be five or fewer words, contain a needlework term, and have an element of threat.   Examples: Crewel World, Hanging by a Thread, Blackwork, Knitting Bones.

List your titles and email addy in the comments section below.  We will forward them to Monica and if one clicks, she will notify the winner!

Posted by ROCCO LOTEMPIO at 3:23 AM