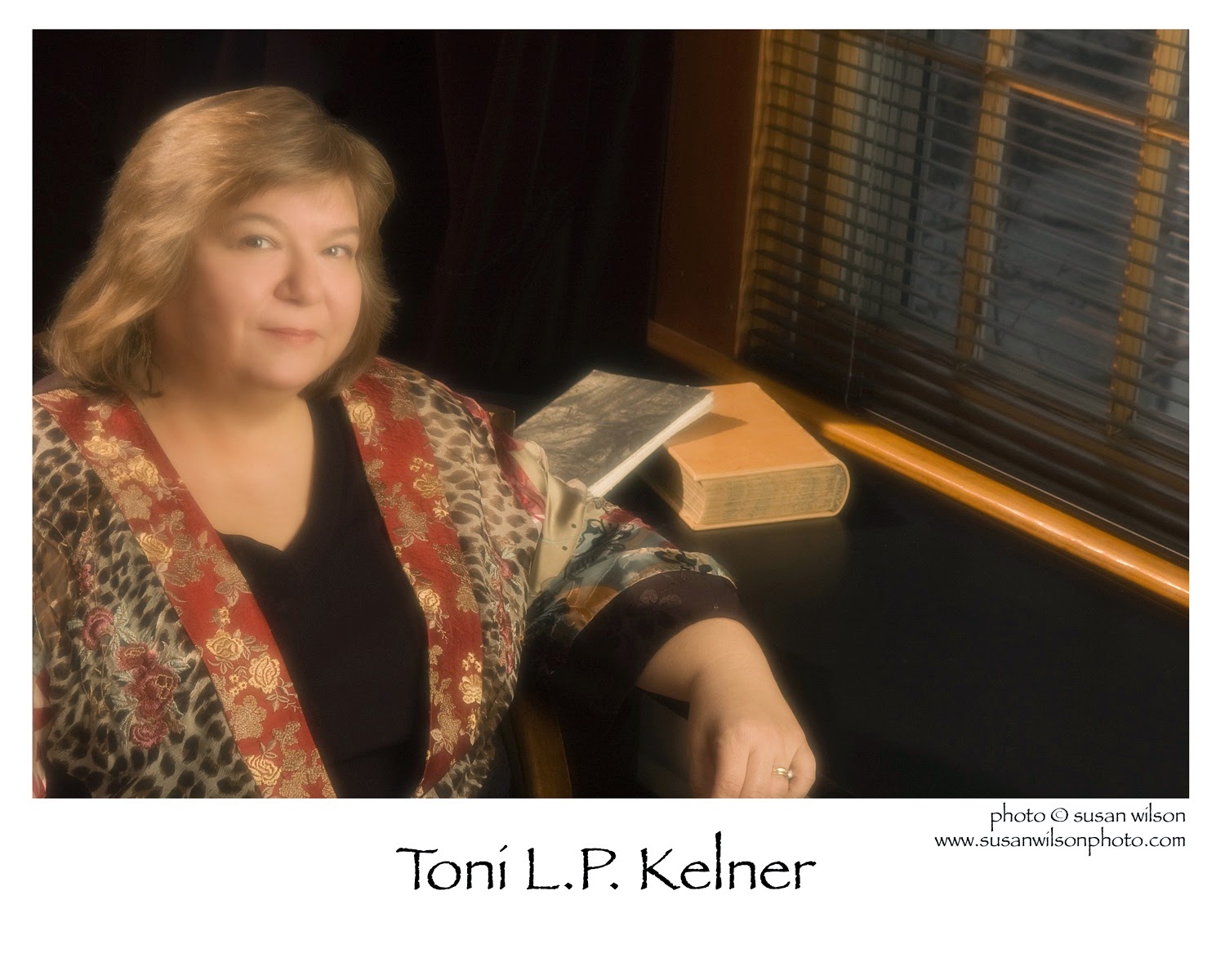 R: Welcome, Leigh! Tell us a little about your background

L: I’m pretty boring, really. I grew up in northern Florida and North Carolina. I’m the youngest of four daughters. My degree is in English, and I worked as a technical writer for about a decade before quitting to be a fulltime mystery writer and fulltime stay-at-home mother. (Yes, that’s two fulltime jobs. Aren’t all parents in the same boat?)

As for my writing background, I’m kind of a split personality. Though The Skeleton Takes a Bow is only my second novel as Leigh Perry, I’ve been publishing mysteries as Toni L.P. Kelner since 1993. As Toni, I wrote eleven novels in two series plus a couple of dozen short stories, and co-edited seven anthologies with Charlaine Harris.

So I’m both a newbie and a old timer.

R: Tell us about the “Family Skeleton” series! It’s a hoot! Where did that idea come from?

L: Well, I was toying with the idea of a paranormal mystery series about ten years ago. Vampires were pretty much covered by my pal Charlaine and her Sookie Stackhouse books, and my pal Dana Cameron was doing a great job with werewolves in her Fangborn series. So I was trying to think of a supernatural denizen who wasn’t already being done well by somebody else. Others had done witches, genies, ghosts, angels, demons, druids, wizards… All that was left was skeletons.

R: What’s the plot of the latest “Skeleton’ novel?

L: First off, in case you haven’t read the first book or the back of this one, I should warn you that Sid the Family Skeleton is an actual walking, talking skeleton. He lives with his best friend Georgia, an adjunct English professor and single mother, and Georgia’s daughter Madison.

In The Skeleton Takes a Bow, he’s playing the role of Yorkick in Madison’s high school production of Hamlet, and when he’s accidentally left backstage overnight, witnesses a murder. He can’t exactly go to the police, and there’s no body found anyway, so he and Georgia have to find the killer themselves.

That’s the bare bones of the story, anyway. (See what I did there? Har!)

R: I get the idea Halloween might be a favorite holiday of yours.  What is and why?

L: I do love Halloween, though it has become a perilous time for me since I started writing Sid books. I cannot be allowed in a store alone in September or October, or I come home with more skeleton stuff. Last week I went to Target and bought a motion-activated wisecracking skeleton-in-a-coffin, Bone Appetite dish towels, a plastic cat skeleton, and a M&M fan thing I can’t even describe but which has a clear skeletal theme. Grocery store? Cheeto’s Bag of Bones and Halloween Oreos because one Oreo in five has a skull on it. Even the pet store has bone-themed items!

R: How do you “get to know” your characters before and while you’re writing the books?

L: Normally I kind of assemble pieces in my head until I know enough about the character that I can hear him or her in my head. (Ironic, since my actual hearing is dreadful.) Sometimes I have to start over, most often when the character isn’t interesting to me. I don’t do well with earnest people, for instance. I’m better with wiseacres.

Now, Sid broke that pattern. As soon as I got the idea for him, the voice and character were there, ready to go. Well, he is still a wiseacre.

R: How do you construct your plots? Do you outline or do you write “by the seat of your pants”?

L: Definitely a pantser. I have outlined, but when I do, I get really bored with the actual writing and feel constrained. Now I just zoom off in wild directions. Not all plot directions work, but that’s what the editing process is for, to make it seem as if I always knew exactly what I was doing.

R: Which do you consider more important, plot or character?

L: Character, without a doubt. Think of Sherlock Holmes and Dr. Watson. Do you remember the majority of the plots of their stories? Do you even remember the solutions to the crimes? Nope, what we love and come back to are the characters.

R: What is the biggest challenge you’ve faced as a writer and what inspires you and keeps you motivated?

L: Having my first series end was sad, but I was really ready to move on just at the time the publisher was ready to no longer publish those books. So I started working on a new series, and that’s where I really had a hard time. It took forever to sell. The motivating part was knowing that I enjoyed writing better than anything else I’d ever done, and having a great support system of friends and husband.

The second challenge was having the second series cancelled? That hurt. A lot. I’d thought I was selling decently, but the numbers enough for the publisher to keep it going. But the payoff for that was my editor still believing in me. She bought the Sid books, and I’m having so much fun.

R: What are you working on now and what are your future writing plans?

L: I’ve got one more Family Skeleton book under contract, and I’m working on it, but don’t want to say too much about it yet. And I’m hoping I’ll get a contract for more after that.

Otherwise, I’ve got a story coming out in a horror anthology, which was a first for me. I don’t know the publication date, but the book is Seize the Night, edited by Christopher Golden.

R: What is a typical workday for you and how many hours a day (or week) do you devote to writing?

L:That’s actually hard to answer. I’m always at the computer, either working or playing or doing email or researching. I don’t set hourly goals, but word count goals. When I’m working on a first draft, I try for 1,000 to 2,000 words a day—fewer at first as I’m getting going on a project, more as I get things moving and my deadline looms.

R: If you could take only three books with your for a year-long writing retreat in a gorgeous setting with no library, which three would you take?

L: The Lord of the Rings, which is three books in one. The Annotated Sandman, because it’s huge and so heavy that I haven’t finished it yet. Pride and Prejudice, so I can imagine Mr. Darcy coming out of the surf.

R: What advice do you have to offer to an aspiring author?

L: Read! Read in your genre, read other genres, read good stuff, read bad stuff, read fun stuff. The more words you absorb, the more sentence structure and plotting you internalize, the more you’ll be able to concentrate on the things that you bring to the table.

R: What question do you wish interviewers (like moi)  would ask? (And what’s the answer?)

I would love to be nominated for an Edgar—wining would be great, but just a nomination would be a joy to my heart. I want to be a GoH at Malice Domestic some day, and Bouchercon, too. Because I’m just that greedy. I want to hit the New York Times bestseller list with a novel. (I hit it with an anthology, but remember the greed part?) I would love to have a piece made into a movie or TV show that would involve me going to a red carpet opening.

Dog or Cat? (answer carefully)
Both. I have a skeletal dog named Femur and my new skeletal cat, Patty (short for Patella). In terms of live animals, I have joint responsibility for two guinea pigs: Spot and Clara.

Beach or Pool?
Both, if at all possible. But if I had to choose, the magic at Disney’s Beach Club Resort. It’s got this magic sand that doesn’t creep into your bathing suit, and is close to a great ice cream place. Best of both worlds!

As if I could pick just one! Um… Murder Must Advertise by Dorothy Sayers.

Argh! You’re killing me! Dirty Dancing and The Avengers.

I’ve never had either, but I am partial to drinks one can put umbrellas in, so I’ll go with the Pina Colada.

I’ve seen Alaska, which is glorious, so I’ll pick Hawaii so I can compare.

That I could find a method of weight loss/exercise that I actually enjoy.

Thanks for a great interview, Leigh!

Folks, here’s where you can find Leigh/Toni:

And now for the giveaway!

One lucky commenter will get to pick either a paperback of A Skeleton in the Family or The Skeleton Takes a Bow, or an Audible Audio download of either. You might get a skeletal item, too, because I have too many around the house.

Leave your name and email address in the comments section below.  For extra entries, you can:

Friend Toni or the Human on FB

Winner will be chosen by random.org! 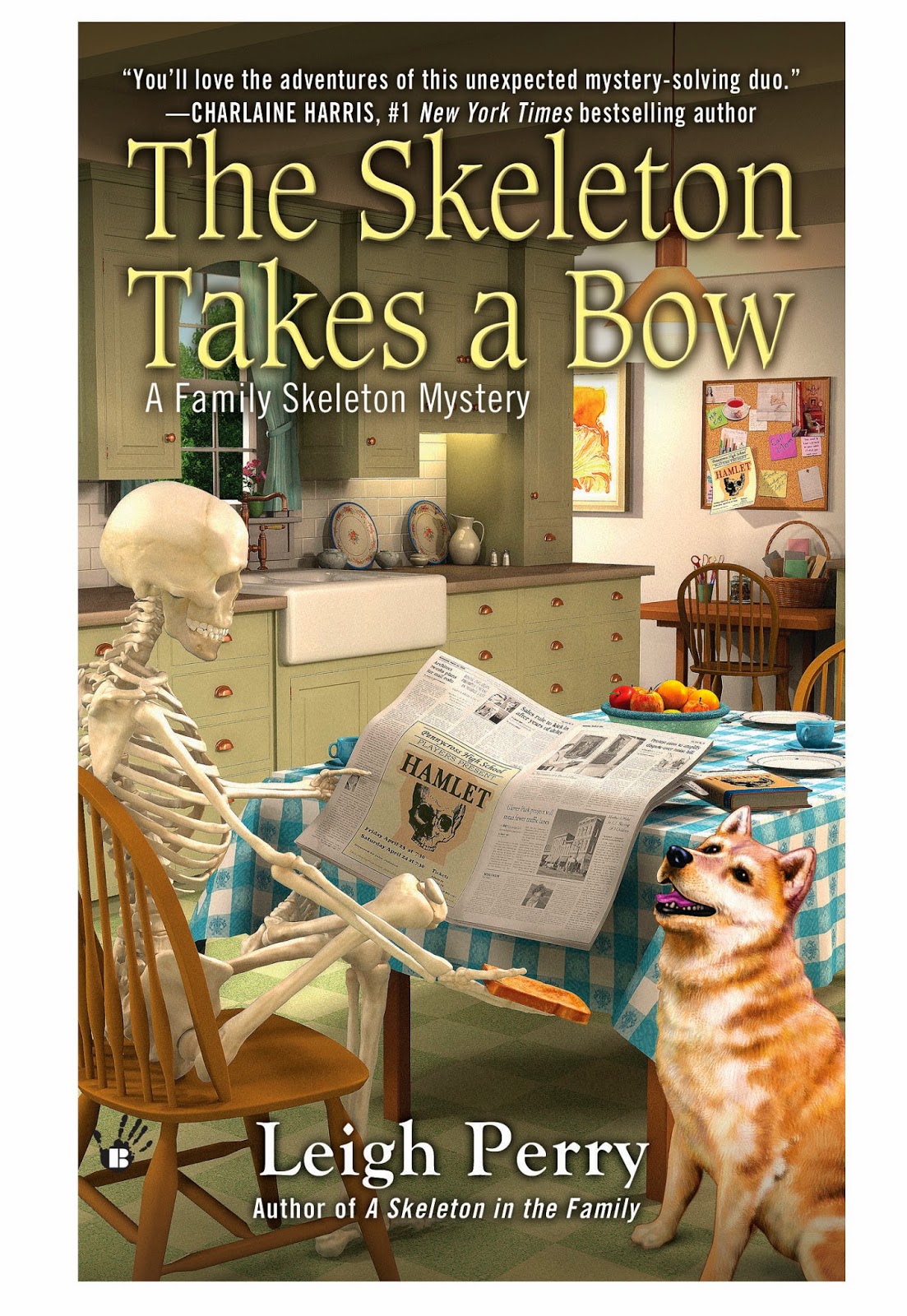 Posted by ROCCO LOTEMPIO at 2:36 AM