Give a warm welcome to...Kristi Abbott!!!

Hello, I’m pleased to welcome Kristi Abbott to the blog! 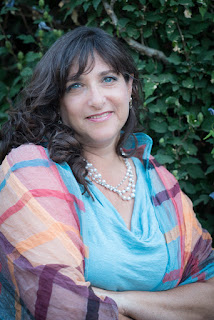 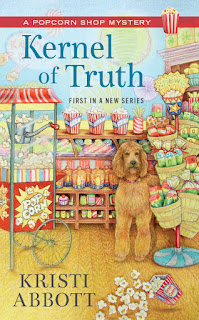 Kernel of Truth is Kristi's first book with Berkley Prime Crime. She has been obsessed with popcorn since first tasting the caramel cashew popcorn at Garrett's in Chicago. If you've never had it, you might want to hop on a plane and go now. Seriously, it's that good.

Kristi lives in northern California, although she was born in Ohio like the heroine of Kernel of Truth. She loves snack food, crocheting, her kids, and her man, not necessarily in that order.

Thanks ROCCO! Ah, my checkered past. What can I say? I’ve written a few different things under a few different names. I wrote four chick lit novels as Eileen Rendahl and then switched to writing urban fantasy under that name. I also wrote some romantic suspense as Eileen Carr. Now I’m writing cozy mystery as Kristi Abbott. The truth is I’m a reader. I read all kinds of books and always have. As a result, I like to write all kinds of different stories.
In Kernel of Truth, Rebecca Anderson returns to her hometown of Grand Lake, Ohio, after her marriage to a celebrity chef ends in divorce. She opens a popcorn shop with the help of her friend and mentor, Coco Bittles, owner of the chocolate shop in town. Coco and Rebecca plan to merge their stores, but all that comes to an abrupt halt when Coco is found dead in her shop in what appears to be a burglary gone wrong. Or at least that’s what everybody but Rebecca thinks happened.
I am a popcorn lover. I used to be hooked on microwave popcorn, but started popping my own a while back when I was told that some of the chemicals in microwave popcorn are really bad for you.
I have to write my way into a character. I generally have an idea of age and background and attitude, but the only way for me to really find the voice is to write it. It can take a few pages or dozens, but that’s my process.
Yes. Oh, wait! Did you want me to choose one of those? To be honest, I exist somewhere between those two extremes. I generally need at least a bit of a roadmap to start the journey, but it’s very rare that I have the patience to do a detailed outline. I start mapping the story out and then I get excited and need to start writing.
I feel like character is plot. You put a certain type of person in a certain situation and things happen a certain way. A different person would react a different way and create a completely different set of events.
The second Popcorn Shop Mystery, Pop Goes the Murder, is finished and turned in. I’m finishing a psychological thriller titled Cover Me in Darkness before I start Popcorn Shop Mystery #3. Cover Me is coming out in December from Midnight Ink and will be under my other author name, Eileen Rendahl. Pop Goes the Murder will come out in January of 2017. I’m trying to figure out if I can do one booksigning for both books and pretend that people will meet two authors.
Oh, my goodness. It was pretty crazy. I’ll see if I can describe it. This was back in 1992 or 93. I was living in Chicago. My oldest son was a baby and I was working full time for a trade magazine in downtown Chicago. My husband traveled a lot on business so for much of the time I was essentially a single mom. It got a little stressful.
One evening on the way home on the El, a man walked through wearing a ski mask. Other than that, he was dressed professionally. Not a suit, but he had on dress pants and a tie. He was slapping himself on the top of his head with a pair of gloves and chanting over and over “It’s warm right now in Sao Paolo!” in a loud voice. It was a little unusual. I started trying to figure out why he would be doing that and decided it was some kind of weird stress relief to act super crazy for just a minute or two while being totally anonymous.

Well, I needed some stress relief. The next night on the way home, while the train was moving and making a lot of noise, I started making a very quiet high pitched humming noise without moving my lips or anything. As the train came into a station and got quieter, people could hear it and I could see them looking around to figure out where the sound was coming from, but then the train would start moving again and they wouldn’t be able to hear it. It was strangely satisfying.

I thought I’d come with a clever harmless way to relieve my stress. When I told my husband about it, he had a somewhat different reaction. That was pretty much when he decided it would be a really good idea for us to move to Phoenix and for me to take some time off.

Just for Fun:
Night or Day?  .
Day. I love me my sunshine.
Dog or Cat? (answer carefully)
Don’t tell Rebecca’s dog Sprocket, but the answer is cat. I’m not sure if Sprocket would forgive me, but sometimes you have to tell the truth and shame the devil.
Beach or Pool?
Depends on what I’m doing. Swimming? Give me a good old fashioned cement pond. Lounging? Put me by those ocean waves.
Steak or salad?
Salad. I’m not a big red meat eater, although every once in a while a girl needs to get some iron in her blood.
Favorite Drink?
I am currently ever so slightly obsessed with Vesper Martinis. It’s the original James Bond Martini and they are very very yummy although also very very strong. Kind of like James Bond, now that I think about it . . .
Favorite Book?
There was a time when I would have answered Little Women with absolutely no hesitation whatsoever. I reread it a few years ago and, well, those girls were some awful goody two-shoes! I still cried my eyes out over Beth, though. I don’t think I have a favorite anymore.
Favorite TV Series?
Several years ago, there was a show called Wonderfalls that lasted about four episodes. Eventually they released the whole first season on DVD. I loved it. I still think about it now and then. I’m not sure if it counts as my favorite TV show of all time, but it’s definitely one I feel ended way too soon. You really weren’t certain if the main character was losing her mind or getting messages from some higher power.
Favorite Movie?
Favorite Actor:
Keanu Reeves. Don’t judge me.
Favorite Actress:
I know it’s cliché, but Meryl Streep. That woman can do anything. One time I watched The Devil Wears Prada and Mama Mia back to back. It was almost like it was two different women, but it wasn’t. It was just her being absolutely magnificent. Plus she’s super cool. Did you know she funded a special screenwriting lab for women screenwriters over 40? How awesome is that?
Dirty Martini or Pina Colada?
Definitely martini. Those sweet drinks give me a heck of a hangover. Although I’m more of a twist girl than an olive girl when it comes to martinis.
Hawaii or Alaska?
Hawaii. I’m not crazy about being cold.
Finish this sentence:  If I could trade places with anyone in the world, it would be JK Rowling. She wrote those awesome books. She’s a class act. As my great aunt would say, she is smart and pretty, too. Doesn’t get better than that.

Kristi will give away a copy of KERNEL OF TRUTH to one lucky commenter on this blog! To enter, leave a comment on this blog post with your name and email address (entries without email will be disqualified). For extra entries, you can do any or all of the below:

Posted by ROCCO LOTEMPIO at 2:23 AM