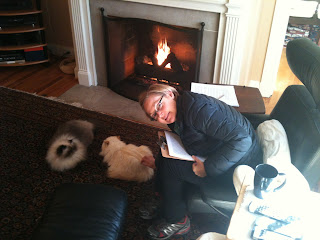 ·        I grew up in the Northwest, Montana, Idaho, and Washington states.  My maternal grandfather was a forest ranger committed to saving the trees, and my paternal grandfather was a logger hell bent on cutting them down.  On both sides, my ancestors were some of the first settlers in Northern Idaho.  I went from eating a steady diet of wild game shot by my dad to becoming a vegetarian while studying philosophy and pondering animal minds when getting my PhD in philosophy at Northwestern University.  Competing with peers who’d come from private schools and posh families “back East,” my working class backwoods grit served me well.  And much to my parent’s surprise, I’ve managed to feed and cloth herself as a professional philosopher.
·
·        When I’m not writing Jessica James mystery novels, I’m Distinguished Professor of Philosophy at Vanderbilt University, and the author of thirteen nonfiction books, ten anthologies, and over 100 articles, including work on campus rape, reproductive technologies, women and the media. I’ve been published in The New York Times, interviewed on ABC television news, the Canadian Broadcasting Network, and various radio programs
·

My latest novel is COYOTE. After her first disastrous year in graduate school, Jessica James returns home from the big city to the backwaters of Montana for a summer job at an historic railroad lodge in spectacular Glacier Park.  After her cousin dies in a gruesome accident at the lumber mill, Jessica is pulled into a fight against the corruption and greed ignited by the oil frenzy on the Montana plains. Her roommate, Kimi RedFox is determined to stop powerful Knight Industries, headed by Cheneyesque billionaire Richard Knight, from drilling oil on the Blackfoot Indian Reservation.  “Kimi” means “secret” in Blackfoot, and the reticent Kimi keeps hers until it’s almost too late.  Kimi’s not about to accept help from Jessica or anyone else, but she’s resolved to find her missing sisters, even if it kills her. Corrupt Richard Knight has assigned his younger brother David to oversee fracking operations in on the Blackfeet reservation.  Trying to overcome his reputation as a spoiled slacker, David wants to impress his brother and earn Jessica’s respect.  But is the handsome young businessman his brother’s henchman or his dupe?  And, will Jessica and Kimi quit sparring long enough to team up and expose sex trafficking, prostitution rings, and murder schemes involving some of the biggest FRACKERS in the country?  Or, will they become the murder’s next victims?

For years, I’ve written nonfiction and learned how to navigate that publishing world.  Writing and publishing fiction is a lot different. Writing fiction is so satisfying and enjoyable (except for the back pain from sitting so long at the computer!). But publishing fiction is very tricky and difficult. It’s hard not to obsess about the marketing and publicity and your amazon rankings and just get back to the writing, which is what I love.
I’ve just started the third Jessica James mystery. It takes Jessica back to Northwestern and Chicago where she gets involved with some pretty creepy stuff going on at the Medical school!

What advice do you have to offer to an aspiring author?
Just write, and keep writing until the end. And get a really good editor!

I hadn’t written a word of fiction until I started WOLF.  I wrote the first draft in 7 weeks and then revised it over the next year.

Just for Fun:
Night or Day?  DAY
Dog or Cat? (answer carefully)   CAT, obviously!
Beach or Pool?   POOL
Steak or salad?  DON’T DARE ANSWER.
Favorite Drink?  Huckleberry Milkshake.
Favorite Book?  Too many….but my mother-in-law, Rosario Ferré wrote some whoppers; her House on the Lagoon is great. And I loved Donna Tartt’s The Goldfinch. I like a lot of Ian McEwan, especially The Beach. For mysteries, I’m a big Elizabeth Peter’s fan. I especially love to listen to her books on audiobooks when read by Barbara Rosenblatt.
Favorite TV Series?  Star Trek….okay, I know, I admit it.  I’m a total Trekkie!
Favorite Movie?  Depends on when you ask. Kurosawa’s Kagamusha is pretty great. I love most of Hitchcock, especially Marnie, and Rear Window. And film noir, of course. Fritz Lang’s The Secret Behind the Door is pretty great.
Favorite Actor: Gregory Peck, Johnny Depp, Theo James.
Favorite Actress: Grace Kelly, Scarlett Johanson, Jennifer Lawrence.
Dirty Martini or Pina Colada? How about Jack and Coke?
Hawaii or Alaska? Alaska for sure. I can’t take the heat.

Thanks Kelly.  You can find her at:
Website: http://www.Kellyoliverbooks.com

Look for Kelly's giveaways on GOODREADS.  Follow her there for more info.