I've been a big fan of Victoria Laurie for quite awhile - her "Psychic Eye" and also her "Ghost Hunter" series!  Abby (and Victoria!) have a new adventure out in July, so as a tribute we thought we'd repost this character interview with Abby from 2013! 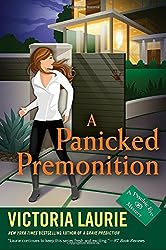 Penguin has donated a copy of Psychic Eye Book 14, A GRAVE PREDICTION, to give away to one lucky commenter!

When Abby is sent to Los Angeles to help train FBI officers to use their intuition, she encounters a case that only she can solve: a series of bank robberies in which the thieves made off with loads of cash but left no clues. Abby’s sixth sense leads her team to a tract of land recently cleared for development, where she gets a vision of four buried bodies. However, a site search turns up only ancient bones and pottery from an American Indian tribe, which is enough to delay construction for years.

With a furious developer and dubious FBI agents on her back, Abby is losing credibility fast. But Abby’s talent rarely leads her astray, and if the bodies aren’t there yet, that means four deaths can still be stopped. She’ll just have to dig a little deeper...

Posted by ROCCO LOTEMPIO at 7:59 AM