Meow, ROCCO here!
Here are my cozy mystery reviews for the month of October, starting with my top pick!

It’s autumn down south, and An'gel and Dickce Ducote are in Natchez, Mississippi, at the request of Mary Turner Catlin, the granddaughter of an old friend. Mary and her husband, Henry Howard, live in Cliffwood, one of the beautiful antebellum homes for which Natchez is famous.

Odd things have been happening in the house for years, and the French Room in particular has become the focal point for spooky sensations. The Ducotes suspect the ghostly goings-on are caused by the living, but when a relative of the Catlins is found dead in the room, An'gel and Dickce must sift through a haunted family history to catch a killer.

Sez ROCCO:  Miranda James Southern Lady mysteries are just as charming as the Cat in the Stacks series, one of my personal favorites.  It's always enjoyable to watch the sisters ferret out clues. This one, with a hint of the supernatural, just might be the best one yet!  if  you haven't sampled this series yet we encourage you to do so!  Rating:  four and a half paws!!!!!!


ROCCO's October Reviews:
Check out these cozies from Penguin! 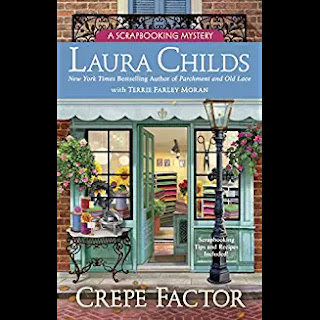 The holidays are a busy time for scrapbook shop owner Carmela Bertrand—but not so hectic that she doesn’t have time to enjoy browsing the booths at the Winter Market with her best friend, Ava. The last thing the ladies expect to see is a lurching man stabbed by a serving fork, dying in front of them.

The victim is loathed restaurant critic Martin Lash, who posted his scathing reviews on the Glutton for Punishment website. And the prime suspect is New Orleans restaurateur Quigg Brevard—who was seen giving the critic a tongue-lashing minutes before someone stuck a fork in him. An old flame of Carmela’s, Quigg asks for her help, which does not please her current beau, Detective Edgar Babcock, to say the least.

Before her relationship is the next victim, Carmela needs to find a murderer who had no reservations about punishing the culinary curmudgeon…


ROCCO sez:  I'm always a big fan of anything Laura Childs writes, and this series is no exception.  The characters, settings and plots are always lively and well thought out.  I especially enjoyed seeing Edgar squirm when CArmela helps out her ex-beau Quigg.  One must pray that Penguin has the good sense to keep this series going!  Rating: four and a half paws!!!!!!!! 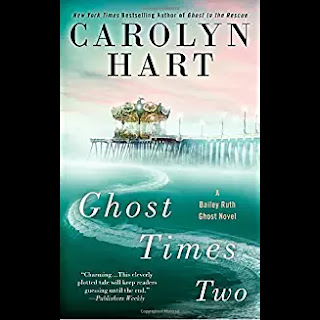 Bailey Ruth Raeburn’s latest mission is to guide the spirit of a deceased young man named Jimmy to the next life. But Jimmy is determined to watch over his still-living girlfriend, Megan. As if being haunted by her late boyfriend wasn’t enough, Megan is dealing with an arrogant, manipulative senior partner who threatens to fire Megan’s vulnerable secretary if Megan accepts a partnership at another law firm.

Since Jimmy refuses to move on while Megan is being blackmailed, Bailey Ruth agrees to help him. But after the partner turns up dead and Megan is found at the crime scene, Bailey Ruth and Jimmy must uncover a killer before the love of Jimmy’s life is ordered to spend a lifetime behind bars…

This series is a lot of fun and should appeal especially to those who love a touch of the paranormal mixed in with their  mysteries!  Carolyn Hart has done it again!  This series is a win win!  ROCCO's rating:  Four paws!

Disaster is on tap in this all-new mystery from the author of Tangled Up in Brew.

It's Oktoberfest in Pittsburgh, and brewpub owner Maxine "Max" O'Hara is prepping for a busy month at the Allegheny Brew House. To create the perfect atmosphere for the boozy celebration, Max hires an oompah band. But when one of the members from the band turns up dead, it's up to Max to solve the murder before the festivities are ruined.

Adding to the brewing trouble, Candy, Max's friend, is acting suspicious... Secrets from her past are fermenting under the surface, and Max must uncover the truth to prove her friend's innocence. To make matters worse, Jake's snooty ex-fiancée shows up in town for an art gallery opening, and she'll be nothing but a barrel of trouble for Max. 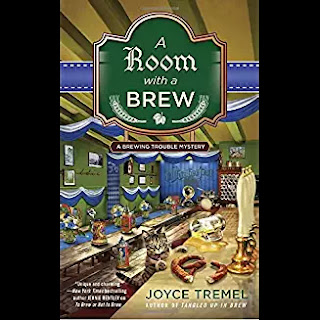 Sez ROCCO:  The Human loves beer and I myself do not  mind the occasional sip. This series is like catnip to me!  The characters are likeable and the plots interesting!  I enjoyed seeing Max going all out to prove her friend Candy's innocence, and of course, there is a dash of romance included!  Grab yourself a Corona (or your brew of choice) and enjoy!  Rocco's rating:  Four and a half paws!

After learning that she comes from a family of witches—and adopting a familiar named Alistair—artist Annabelle Britton has made beautiful Portsmouth, New Hampshire, her home. Together with her coven, this good witch is trying to put a stop to magic and murder most foul.

When Anna takes Alistair to see local veterinarian Ramona Forsythe, they meet the most famous cat in town: Ruby the Attitude Cat, spokes-feline for a pet food brand. But then Ramona turns up dead, and Ruby goes missing. It seems like the murderer used magical means, so it’s up to Anna and Alistair to catch a killer and cat-napper as only a canny cat can. 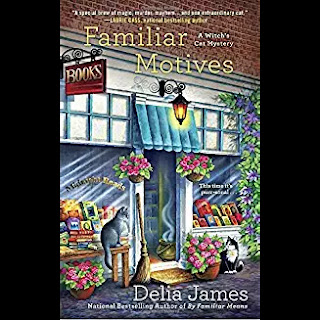 Sez ROCCO:  Oh, come on! Who wouldn't like a series about a witch's cat??????  The plot in this one is especially well thought out and we always love it when cats play a major role in the mystery solving.  This series is a delight, even if the supernatural isn't your cup of tea!  ROCCO's rating:  Four paws!

Enter to win a copy of GHOST TIMES TWO!

Leave your name and email address in the comments section!  Winner will be chosen at random!  US entries only please! Contest closes midnight October 8!