WITH A LITTLE HELP FROM MY FRIENDS
by
Sharon Farrow 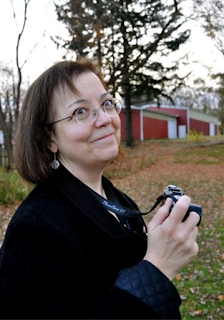 When writers pitch a mystery series to an editor, front and center are the main character and the set-up. An engaging protagonist who jumps off the page, coupled with a distinctive premise, will help clinch the sale. But one character cannot carry an entire series on his or her shoulders. Even Sherlock had Watson, Mycroft, Mrs. Hudson and Lestrade. To paraphrase an African proverb: it takes a village to solve a crime.

In a contemporary cozy, the main character is often a business owner in a small town or city neighborhood. Peopling this town with a colorful roster of fellow shopkeepers, friends, rivals, and relatives provides rich fodder for a mystery series in a number of ways:

Romantic Interest: Most cozy heroines aren’t married, which often results in a romantic relationship with a man who lives in the town. Although this romance may continue throughout the series, more than one male character can vie for the heroine’s hand. This situation leaves the reader wondering which one she will choose in the end. Either way, a romantic interest helps to reveal a more vulnerable side to the cozy sleuth. A romantic partner may also motivate the heroine to solve the mystery, particularly if the boyfriend is in danger – or suspected of committing a crime. Will love conquer all? Sometimes it doesn’t. Murder has a way of spoiling the best of romantic moods.

Sidekick/Bestie: A series protagonist who doesn’t have a sidekick or BFF can justifiably be viewed as odd. Sidekicks are there to bounce ideas off of, help bring the main character down to earth, and act as a support system. Best friends usually share a long history with the heroine, frequently knowing her better than anyone else. Because of this, a best friend provides needed insight into the main character. Besties can find themselves in precarious situations in an effort to protect their sleuthing pal. For those who grew up reading Trixie Belden mysteries as I did, think back to how many times Honey Wheeler put herself at risk because she didn’t want to abandon her best friend, the intrepid Trixie. And the protective feeling is a mutual one. A cozy sleuth will go to extreme lengths to keep her BFF safe. After all, best friends are not only necessary. They’re irreplaceable.

Rival: No matter how entertaining or likable a cozy series heroine is, someone in town doesn’t like her. It could be a fellow business owner motivated by envy, either personal or professional. If the heroine is drawn into a murder case, the rival will be the first to cast suspicion on her involvement. Although a crime is committed in each cozy, there should be opportunity for trouble aside from that. A rival is there to stir the pot. Some rivals merely demand to be the center of attention, thus making life more difficult for everyone. The odds are that a truly obnoxious rival is fated to be killed off. Rest assured, another rival will pop up in the next book. A troublemaker is the Energizer Bunny of a cozy series.

Victim/Villain: It’s a cozy truism: someone in town will become the victim of a crime, and someone will commit  the nefarious deed. A local resident is not always the victim or the perpetrator; it may be a visitor who is murdered or endangered. Still, there is always enough drama unfolding among the local population to provide plenty of potential victims and villains. The stakes are raised when suspects and victims are drawn from the regular cast of supporting players. Imagine the shock when a character everyone thought they knew well winds up as the killer! But to pull this off, a strong cast of colorful – often contrary – people must inhabit that lovely bucolic village or quirky city district.

Informants: The cozy sleuth requires information in order to solve the mystery. Who better to provide that information than the people she lives and works with. For example, there always seems to be a local gossip who loves to spread rumors. My Berry Basket series has three: a mother and her two irrepressible sons. Since the mother is a receptionist at the police station, her gossip includes the latest village crime. Because of the variety of shops in a typical cozy, the people who work there possess special skills and knowledge pertinent to that business. So if a victim has been poisoned by a custom made birthday cake, it’s time to visit the local bakery. Finally, a crime as dark as murder always leads to the uncovering of secrets. Many of those secrets are held by the cast of supporting characters, which not only help solve the mystery, but lead to a new understanding of the local postmaster, mayor or shopkeeper. Or the heroine herself.

In the end, the amateur sleuth will indeed catch the criminal. However, it took an entire village to help her do it.

About the author
Sharon Farrow is the latest pen name of award winning author Sharon Pisacreta. Born and raised in Detroit, Michigan, Sharon has been a freelance writer since her twenties, with her first novel released in 1998. Published in mystery, fantasy, and romance, Sharon currently writes The Berry Basket cozy mystery series, which debuted in 2016 with Dying For Strawberries. She is also one half of the writing team D.E. Ireland, who co-author the Agatha nominated Eliza Doolittle and Henry Higgins mysteries.
In her former life, Sharon turned her hand to a variety of endeavors from principal investigator on an archaeological site, college history instructor, art gallery assistant, and dancing in a dog costume for a non-profit company (it’s a long story). Although Sharon has lived in Rhode Island, New York and New Jersey, she calls Michigan home, specifically the beautiful coastline of Lake Michigan. She is so enamored of the sand dunes, orchards and beaches of western Michigan, she set The Berry Basket mysteries in a town similar to the one she is lucky to live in.
Connect with Sharon at: 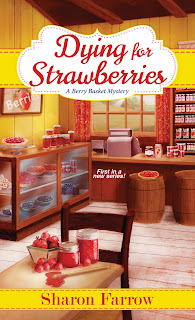 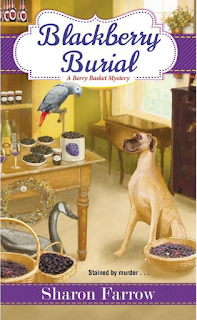 Sharon will give away signed copies of both Berry Basket Mysteries, Blackberry Burial and Dying for Strawberries, to two winners picked at random. To enter, please leave a comment on this blog post and don’t forget to include your name and email address.

Posted by ROCCO LOTEMPIO at 7:51 AM