It's time for my July cozy reviews!

Let's start off with one by one of my favorite authors: 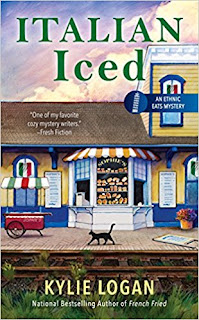 When Laurel Inwood features Italian cuisine on the Terminal at the Tracks menu, she knows she'll need to stock the shelves, the fridge, and the freezer with plenty of wonderful delicacies. She just never expected one of them to be her former employer, Hollywood superstar Meghan Cohan.
And one day, when Laurel is at the restaurant early to get ready for the regular rush of customers, that's exactly what she finds--Meghan dead in the Terminal freezer.
What's a Hollywood A-lister doing in Hubbard, Ohio?
For Laurel, that's the real question, because the first question she'd ask in any other murder investigation--who would want the victim dead?--seems pretty much a no-brainer in this case.
Who would want Meghan dead?

Love this series and love, love, the concept of this particular instalment.  Watching Laurel track down the killer is sheer fun!  A winner!  Four and a half paws. 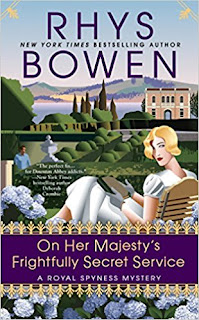 When royal sleuth Georgie Rannoch receives a letter from her dearest friend Belinda, who's in an Italian villa awaiting the birth of her illegitimate baby, she yearns to run to her side.  But then opportunity presents itself in a most unexpected way--her cousin the queen asks her to attend a house party in the Italian Lake Country. The Prince of Wales and the dreadful Mrs. Simpson have been invited, and Her Majesty is anxious to thwart a possible secret wedding. Georgie soon discovers that she attended finishing school with the hostess of the party--and the hatred they had for each other then has barely dimmed. To add to things, Darcy's working undercover and her actress mother shows up.  So of course, Murphy's Law ensues!

An excellent entry in this series.  I'm generally not too fond of stories set abroad but in Georgie's case I'll make an exception LOL.  Watching her cope with all the quirky characters around her in addition to solving the mystery is part of what makes this series great.  Four Stars. 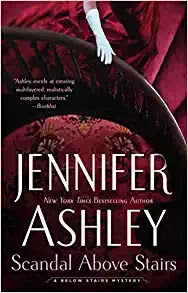 Priceless artwork has gone missing from the home of a wealthy baronet, and his wife stands to take the blame. When Kat's employer asks for help in clearing her friend's name, Kat trades her kitchen for the homes of Mayfair's wealthiest families. Soon antiques are disappearing not only from the extravagant households of connoisseurs and collectors, but from the illustrious British Museum.
As the thefts increase in frequency, Kat calls upon her friend Daniel McAdam, who has already set himself up in a pawnshop on the Strand as a seedy receiver of stolen goods. When a man is murdered in the shop, Kat must use all of her wits to see that the thieves are caught and justice is done.

This second adventure in Jennifer Ashley's "Below Stairs" series delivers! Kat is an excellent sleuth and I have to admit I'm growing fonder of this series with each volume. Four Stars. 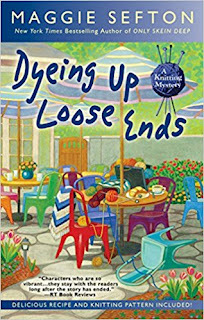 Kelly is happily busy with her son, Jack, now a rambunctious four-year-old preschooler. Jack keeps his mom on her toes and drinking all the coffee she can handle at Pete’s Porch Café. Kelly splits her free time between Pete’s and Lambspun, where her fellow knitters love hearing all about Jack’s latest exploits. They’ve also been taking a trip down memory lane, reminiscing about crimes that Kelly had a hand in solving over the years. But the Lambspun crew is horrified when a very present-day murder occurs in their midst—and Julie is the victim.

With her sleuthing instincts on full alert, Kelly starts asking questions. The well-liked waitress may have had enemies no one knew about, or she could have just been in the wrong place at the wrong time. Kelly and her friends at Lambspun soon learn that the answers are knottier and more shocking than they ever dreamed…
It's nice to see how the c haracters in this series have grown, and that they still enjoy solving msyteries! Fans will love this adventure.  Four Stars! 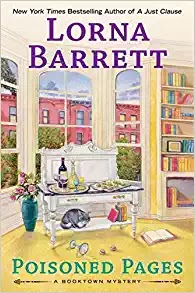 They say nothing kills a good party like a bad menu, and Tricia Miles, mystery bookstore owner and amateur sleuth, finds that out in spades.  Tricia's learned to cook, and decides to show off her new culinary skills by making all the food for her housewarming party herself.  Unfortunately, when one ofthe guests dies, Tricia and her ex-lover, Chef Baker, find themselves in the proverbial hot water!  To top things off, Stoneham is in the middle of a vandalism wave. Are the two connected? Tricia has to find the killer before she becomes the next course on his menu.

I've only recently discovered this series and, as with many others, now I have to go back and read all the others!  I love Tricia's style and wit, and love to watch her as she immerses herself in sleuthing!  A definite winner. Four Stars.

Posted by ROCCO LOTEMPIO at 3:22 AM