Meow!  It's time for our February cozy reviews!  We'll start with one of our Favorite authors! 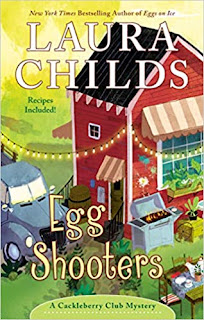 Suzanne Dietz, co-owner of the Cackleberry Club Café, is visiting her fiancé, Dr. Sam Hazelet, when a masked gunman bursts into the emergency room. He shoots two people and would probably have done more damage had Suzanne not brained him with a thermos full of chili. Still, the gunman manages to escape.Now the ladies of the Cackleberry Club are determined to find the killer before he finds them.

Suzanne and the gang are back in another spine-tingling mystery.  This series is becoming one of my can't miss!!!!!  Five paws!!!!!! Sarah Grayson and her capable cat, Elvis, go undercover in the newest installment of the New York Times bestselling Second Chance Cat Mysteries.Sarah and Elvis can always be found at a charming secondhand shop in the village of North Harbor, Maine. Despite the small-town setting, the daring duo often find themselves wrapped up in murder, but luckily they have help--a quirky group of senior citizens runs an amateur detective agency called Charlotte's Angels out of the store.The Angels are hired to look into who is sabotaging cat shows in the state, and they decide the best way to do that is to send Elvis the cat undercover as a contestant. But then one of the cat show volunteers is murdered just before the latest competition, and Sarah and the Angels have to catch a killer in two shakes of a cat's tail!

LIke its sister sereis, the magical cats, this one just keeps improving with each volume!  the characters are well defined and the plot appropriately twisty!  Five paws!

A PAIRING TO DIE FOR 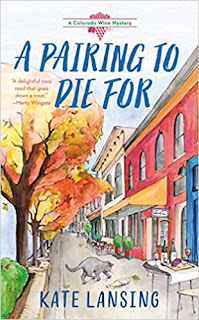 A young winemaker is over a barrel when her new boyfriend is accused of murder in this delightful cozy mystery.It's fall in Boulder, Colorado, and the leaves aren't the only things changing. Parker Valentine, owner of Vino Valentine, is finally settling in to her winery and her new relationship with Reid Wallace, a local chef. But their delicate pairing is endangered when Reid's estranged family comes into town to celebrate the opening of his new restaurant.Reid and his family are immediately at loggerheads, given their often acidic temperaments, but Parker still wants to make a good first impression. However, her efforts might be in vain when Reid's sous chef is found dead in the alley behind the restaurant, and Reid is implicated in the murder. In order to save Reid, Parker will have to find the real killer, even if the truth is difficult to swallow. 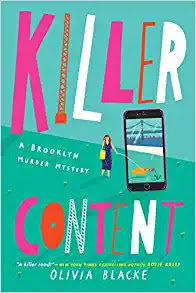 It's murder most viral in this debut mystery by Olivia Blacke.Bayou transplant Odessa Dean has a lot to learn about life in Brooklyn. So far she's scored a rent free apartment in one of the nicest neighborhoods around by cat-sitting, and has a new job working at Untapped Books & Café. Hand-selling books and craft beers is easy for Odessa, but making new friends and learning how to ride the subway? Well, that might take her a little extra time.But things turn more sour than an IPA when the death of a fellow waitress goes viral, caught on camera in the background of a couple's flash-mob proposal video. Nothing about Bethany's death feels right to Odessa--neither her sudden departure mid-shift nor the clues that only Odessa seems to catch. As an up-and-coming YouTube star, Bethany had more than one viewer waiting for her to fall from grace.Determined to prove there's a killer on the loose, Odessa takes matters into her own hands. But can she pin down Bethany's killer before they take Odessa offline for good? 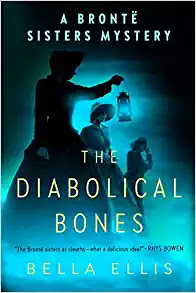 Haworth Parsonage, February 1846: The Brontë sisters— Anne, Emily, and Charlotte—are busy with their literary pursuits. As they query publishers for their poetry, each sister hopes to write a full-length novel that will thrill the reading public. They’re also hoping for a new case for their fledgling detecting enterprise, Bell Brothers and Company solicitors. On a bitterly cold February evening, their housekeeper Tabby tells them of a grim discovery at Scar Top House, an old farmhouse belonging to the Bradshaw family. A set of bones has been found bricked up in a chimney breast inside the ancient home. Tabby says it's bad doings, and dark omens for all of them. The rattled housekeeper gives them a warning, telling the sisters of a chilling rumour attached to the family. The villagers believe that, on the verge of bankruptcy, Clifton Bradshaw sold his soul to the devil in return for great riches. Does this have anything to do with the bones found in the Bradshaw house? The sisters are intrigued by the story and feel compelled to investigate. But Anne, Emily, and Charlotte soon learn that true evil has set a murderous trap and they've been lured right into it... 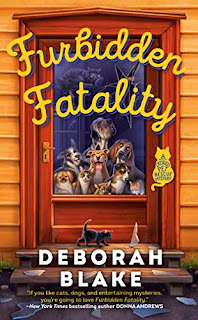 a lottery winner uses her good fortune to save a local pet sanctuary, but when a body is discovered on the property, she just might be in the doghouse in this first book in a new, charming cozy mystery series from author Deborah Blake.

Kari Stuart's life is going nowhere—until she unexpectedly wins the lottery. The twenty-nine-year-old instant multimillionaire is still mulling plans for her winnings when rescuing a bossy black kitten leads her to a semi-abandoned animal shelter. They need the cash—Kari needs a purpose.But the dilapidated rescue is literally going to the dogs with a pending lawsuit, hard to adopt animals, and too much unwanted attention from the town's dog warden. When the warden turns up dead outside the shelter's dog kennels, Kari finds herself up a creek without a pooper-scooper.With the help of some dedicated volunteers, a cute vet, and a kitten who mysteriously shows up just when she needs it, Kari must prove her innocence all while trying to save a dog on death row. Now she just needs to hope that her string of unexpected luck isn't about to run out

An interesting premise and a good start to a new series!

A SIDE OF MURDER 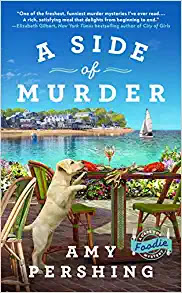 Samantha Barnes was always a foodie.  And when the CIA (that’s the Culinary Institute of America) came calling, she happily traded in Cape Cod for the Big Apple.  But then the rising young chef’s clash with another chef (her ex!) boils over and goes viral. So when Sam inherits a house on the Cape and lands a job writing restaurant reviews, it seems like the perfect pairing. What could go wrong? Well, as it turns out, a lot. The dilapidated house comes with an enormous puppy. Her new boss is, well, bossy.  And the town’s harbor master is none other than her first love.  Nonetheless, Sam’s looking forward to reviewing the Bayview Grill—and indeed the seafood chowder is divine. But the body in the pond outside the eatery was not on the menu. Sam is certain this is murder. But as she begins to stir the pot, is she creating a recipe for her own untimely demise?
Another promising new series.  can we dare hope Berkley is reviving their cozies??????  We hope so.
Four ad a half paws
And another debuting this month:
HISS H FOR HOMICIDE
A NICK AND NORA  MYSTERY
T. C. Lotempio
February 9, 2021
Kindle/Trade paperback
Beyond the Page Publishing 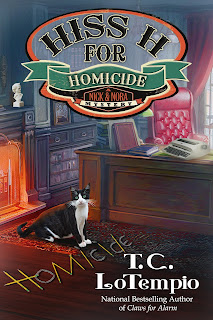 Nick and Nora are back in a tantalizing new mystery that’s far more dangerous than a game of cat and mouse . . .

Never one to turn away from a challenge—even when it goes against her better judgment—Nora Charles can hardly say no when an old friend of her mother’s comes to town seeking her help. The author of steamy romances has learned that her writing partner is severing their relationship and threatening to reveal dark and dirty secrets in a tell-all, and she pleads with Nora to intervene. Reluctantly agreeing to help, Nora pays a visit to the writing partner, ready to make her case—right up until the moment she discovers the woman’s lifeless body.

With the police convinced that Nora’s friend is the culprit, she and Nick begin delving into the dead woman’s past and her provocative tell-all. It soon becomes apparent that the woman had a knack for digging up dirt and wasn’t shy about exposing skeletons in closets, and before long Nora has a seemingly endless list of suspects who were at risk of having their darkest secrets revealed. With a police force intent on throwing the book at Nora’s friend and time running out, she and Nick must outwit a dangerous killer before they take their own secrets to the grave . . .

Unfortunately, we cannot review this mystery, but we sincerely hope that our fans will like it!!!!  Meow!

Want to win one of ROCCO's review copies?  Leave your name and e-mail address in our comments sectin below.  Winner will be chosen at random. US entries only please.  Contest ends midnight, February 26.
Posted by ROCCO LOTEMPIO at 11:30 PM