Ma-Row!  Here are my November reviews for the latest Penguin cozy mysteries! 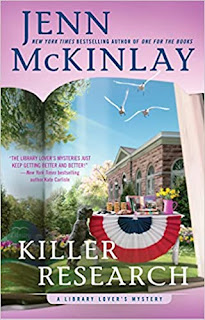 Spring has sprung in Briar Creek, but it is not all sunshine and roses, in the newest Library Lover's Mystery from the New York Times bestselling author of One for the Books.Spring is livening up Briar Creek after a long, cold winter, and newlyweds Lindsey and Sully could not be happier. Even though the upcoming mayoral election is getting heated, everything else in town is coming up daffodils...until a body is found.Ms. Cole, a librarian and current candidate for town mayor, is shocked when she opens her trunk to discover a murder victim who just so happens to be a guy she dated forty years ago and the founder of the baking empire Nana's Cookies. As the town gossip mill turns, a batch of rumors begins to circulate about Ms. Cole's rebellious youth, which--along with being a murder suspect--threatens to ruin her life and her budding political career. But Ms. Cole is one tough cookie who will not go down without a fight.Has the campaign for mayor turned deadly? It is up to Lindsey, Sully, and the rest of the crafternoon pals to see how the cookie crumbles and figure out who is trying to frame Ms. Cole for murder and why.

Thank goodness marriage has not dampened Lindsey and Sully's propensity for getting involved with murder!  This time out it's Ms. Cole aka the Lemon who needs thier help when she's a suspect in the murder of an ex-flame.  Hard to think of Ms. Cole with an ex-flame, but stranger things have happened.  You dont need to have read others in this series to enjoy this one, but it helps keep all the interesting characters straight.  Five paws!

A Murder she Wrote Mystery 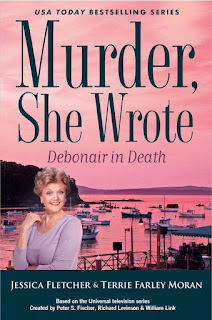 When a local art shop owner is murdered, Jessica Fletcher is surprised to once again be working alongside her old friend MI-6 agent Michael Haggerty to solve the case in the newest mystery in this USA Today bestselling series.
When Nelson Penzell, co-owner of a local art and treasure store in Cabot Cove, is murdered, the nail tech from Jessica Fletcher's favorite beauty parlor is the main suspect. After all, she's the one who ran out of the store screaming, covered in blood, and holding the murder weapon. Jessica is positive that despite the circumstances, Coreen can't possibly be guilty, and is determined to prove it.When Michael Haggerty, handsome MI-6 agent and Jessica's old friend, is caught snooping around the victim’s home, it's quickly apparent to her that she was right. Nelson has always had a bit of a reputation for being a rake, but Haggerty is sure his sins go far beyond what anyone in town imagined. If she wants to clear Coreen's name, Jessica will have to work alongside Michael to find out who killed Nelson—and maybe help bust a crime ring in the process.

Jessica goes back to the roots of the old series in this latest entry.  Fans of the show and the book series will enjoy seeing familiar characters in action and, of course, Jessica pulling the rabbit out of the hat to solve the crime!  Four and a half paws. 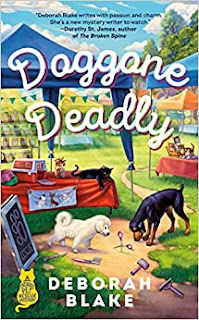 Kari Stuart is roped into helping out at a dog show—but soon finds she’s bitten off more than she can chew when her best friend is framed for murder in this new Catskills Pet Rescue Mystery.When the woman running the big regional dog show calls out sick, dog groomer Suz Holden is asked to take over. But it’s too much for her to handle by herself— considering the president of the kennel club, Olivia Weiner, criticizes her at every turn—so she calls in her best friend, Kari Stuart, for help.A long, stressful day goes from bad to worse when a local breeder is found dead, and the murder weapon seems to incriminate Suz.While Kari knows her friend isn’t guilty, the police aren’t so sure, especially after a second murder points to Suz again. But trying to run a dog show and investigate a murder at the same time is like herding cats, and Kari will have to rely on the rest of the Serenity Sanctuary staff to keep things running smoothly while she—and her beloved and clever kitten, Queenie—sniff out the truth.

Any mystery that has dogs and cats in it is a sure winner with us!  an enjoyable read. PLus the cover's cute!  Four paws!

An Eggnog to Die For 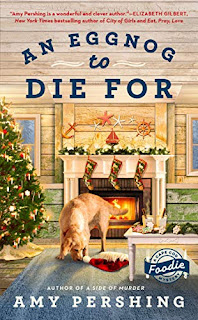 Christmas is coming to Cape Cod, but when Sam Barnes finds a very dead Santa in a very hip restaurant, it’s up to her to sift out suspects who have been naughty vs. nice….Professional foodie Samantha Barnes has a simple Christmas list: a quiet holiday at home with her dog and a certain handsome harbor master; no embarrassing viral videos; and no finding dead bodies. Unfortunately she’s got family visiting, she’s spending a lot of time in front of the camera, and she’s just stumbled over the lifeless body of the town’s Santa Claus. Plus, Sam’s plans for Christmas Eve are getting complicated.  There’s the great eggnog debate among her very opinionated guests.  There’s the “all edible” Christmas tree to decorate.  And there’s her Feast of the Five Fishes prepare. Nonetheless, Sam finds herself once again in the role of sleuth. She needs to find out who slayed this Santa—but can she pull off a perfect feast and nab a killer?

Food and mystery what could be more perfect?????  Sam is an engaging character and the holiday mystery is interesting!  I liked the "all edible" Christmas tree. Four paws. 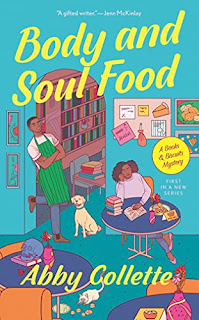 In this page-turning new mystery series, fraternal twins Keaton and Koby will pull double duty when they take down a killer while preparing to open their new bookstore and soul-food café, Books & Biscuits.When Koby Hill and Keaton Rutledge were orphaned at age two, they were separated, but their unbreakable connection lingered. Years later, they reunite and decide to make up for lost time and capitalize on their shared interests by opening up a well-stocked bookstore and cozy soul-food café in the quaint Pacific Northwest town of Timber Lake. But this new chapter of their lives could end on a cliffhanger after Koby's foster brother is found murdered.The murder, which occurred in public between light-rail stops, seems impossible for the police to solve. But as Keaton and Koby know, two heads are always better than one, especially when it comes to mysteries. With just a week to go before the grand opening of their new café, the twins will use their revitalized connection with each other to make sure this is the killer's final page

Definitely a different twist on a cozy mystery!  Twins and a soul food cafe is a good premise and perfect setting for murder!  Looking forward to more.  Four paws!

Posted by ROCCO LOTEMPIO at 9:09 AM