Ma-Row!  Here are the cozies to watch for in July!

MURDER IS NO PICNIC by Amy Pershing |

The Fourth of July is coming, and for professional food lover Samantha Barnes, it’s all about the picnic. What could be better than a DIY clambake followed by the best blueberry buckle in the world? Sam has finally found the perfect recipe in the kitchen of Clara Foster, famed cookbook author and retired restaurateur, and she’s thrilled when Clara agrees to a buckle baking lesson.

But when Clara dies in a house fire blamed on carelessness in the kitchen, Sam will have to find Clara's killer before the fireworks really start....

This is a four paw-er!

Autumn has arrived at Castle Dark, and Nora Blake has settled into her role as an actor in Derek Corby’s castle murder-mystery troupe. She is troubled, however, by the setting of Derek’s fall mystery: the catacombs in the depths of the castle. Yes, these catacombs are part of a set, the skeletons and cobwebs mere props, but Nora feels uneasy in the shadowy passages beneath Castle Dark. When a man is killed during one of their first shows, the eerie catacombs become a place of terror.

Nora soon discovers that someone else is in danger and that she may also be in the sights of the killer. With the help of her handsome boyfriend, Detective John Dashiell, Nora will have to go off-script to prevent a murderous encore.

We enjoyed the first entry in this series and looked forward to this one, which did not disappoint.  Four and a half paws!

A COLD NOSE FOR MURDER by Jennifer Hawkins |

When Emma Reed moved to the Cornish village of Trevena, she was looking forward to making new friends, opening up a small tea shop and taking plenty of brisk walks with her talking dog, Oliver. But her fresh start is threatened when the local pub run by Emma’s friends Liza and Sam is at risk of closing. Sam and Liza do everything they can to spark interest in the pub, including opening up old smuggling tunnels that run underneath the building. But instead of finding hidden treasure or antique bottles in the tunnel, they find a skeleton. Now the prime suspects, Sam and Liza will need to sniff out the killer to prove their innocence.

Liza is an enjoyable heroine and the plot captured our interest!  four paws up!

A PERILOUS PAL by Laura Bradford |

Emma Westlake, proprietor of A Friend for Hire, finds a heart-wrenching email from a prospective client in her inbox. The email is from Kim Felder, a woman struggling with empty-nest syndrome and an out of left field divorce. Emma does her best to get Kim out of her rut, but all fun ends when Kim’s ex winds up dead. Now, Kim is Deputy Jack Riordan’s lone suspect in a murder Emma knows she did not commit. Emma will have to put her budding relationship with the deputy on the line to corner a cunning killer.

We REALLY enjoyed the first outing in this series with an interesting premise.  Am anxious to see how far the author can take Emma and Scout!  Love the romantic tenstion between Emma and Riordan too!  Exceedingly enjoyable. Five Paws.

THE PAPER CAPER by Kate Carlisle |

San Francisco book-restoration expert Brooklyn Wainwright is excited to be included in the Covington Library’s first annual Mark Twain Festival. The festival is the passion project of wealthy media mogul, book lover, and newspaper owner Joseph Cabot, who considers himself Twain’s biggest fan. Brooklyn’s hunky husband, Derek, and his security team are charged with keeping Joseph and his beautiful young wife safe during the festivities taking place all over town.

When someone is mysteriously poisoned right before Brooklyn’s eyes, she’s not convinced that the victim was the intended target. Now she and Derek must frantically chase clues and suspects through the streets of San Francisco before another murder becomes front-page news.

What can I say about this series that hasn't already been said?  We adore Brooklyn and her hunky husband and never tire of Carlisle's plots.  Brooklyn always seems to get into one hot spot even hotter than the last!  An enduring series. Five Paws.. . 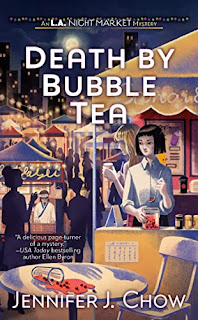 Two cousins who start a food stall at their local night market get a serving of murder in this first novel of a delicious new cozy mystery series by Jennifer J. Chow, author of Mimi Lee Gets a Clue.When Yale Yee discovers her cousin Celine is visiting from Hong Kong, she is obliged to play tour guide to a relative she hasn’t seen in twenty years. Not only that, but her father thinks it’s a wonderful idea for them to bond by running a food stall together at the Eastwood Village Night Market. Yale hasn’t cooked in years, and she hardly considers Celine’s career as a social media influencer as adequate experience, but because she’s just lost her job at her local bookstore, she feels she has no choice. Yale and Celine serve small dishes and refreshing drinks, and while business is slow, it eventually picks up thanks to Celine’s surprisingly useful marketing ideas. They’re quite shocked that their bubble tea, in particular, is a hit—literally—when one of their customers turns up dead. Yale and Celine are prime suspects due to the gold flakes that Celine added to the sweet drink as a garnish. Though the two cousins are polar opposites in every way, they must work together to find out what really happened to the victim or the only thing they’ll be serving is time.
Looks to be a promising series.  four paws
GIVEAWAY!!!!!!!!
At last, this month I have a giveaway of a copy of A PERILOUS PAL to one lucky commenter! Leave your name and email addy in our comments section and MAXX will select one name at random!  Contest ends midnight, July 15th.
Posted by ROCCO LOTEMPIO at 12:30 AM