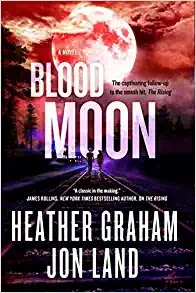 They may have managed to win a major battle against the powerful enemy determined to destroy civilization as we know it. But the war continues, with Alex and Sam embarking on a desperate journey to save mankind, even as their friendship blossoms into something much more.The roadmap for their journey lies in a mysterious book, the language of which has never been deciphered, until Alex finds himself able to translate the words that may hold the keys to saving the future. Toward that end, Alex’s and Sam’s quest spirits them away to a myriad of locations around the world, each of which holds another piece of the puzzle that can defeat the alien invaders.But an ageless foe, long the guardian of the secrets his race has left behind on Earth, arises to stop them at all costs. At his disposal is a deadly and merciless army that has been awaiting this very war, an army as unstoppable as it is relentless.Over the ruins of the lost Mayan city of El Mirador, a blood moon is about to rise, triggering the end of mankind unless Alex and Sam can prevail in a struggle that will determine the fate of the planet. As forces both ancient and modern converge, as painful choices must be made and sacrifices accepted, two young heroes will rise again to stand as the final line of defense to preserve their world and their love.
A remarkable blend of suspense, sci-fi and mystery, BLOOD MOON is a worthy sequel to THE RISING that will be sure to delight sci-fi fans everywhere.  Land and Graham work seamlessly together to create a true masterpiece, a book that will leave you on the edge of your seat and wanting more!  It combines sci-fi, mystery, with teen romance/angst thrown in for good measure! this book should appeal to a broad range of fans, mystery, sci-fi and romance lovers alike!
We sincerely hope there will be more offerings and adventures ahead for Alex and Samantha! the book releases today - check it out at your local bookstore!
Five Paws UP!!!!!!!!
Posted by ROCCO LOTEMPIO at 11:30 PM