UNMATCHED AND UNEQUALED....MARY JANICE DAVIDSON RETURNS! (with an exclusive peek at UNDEAD AND UNSURE!) 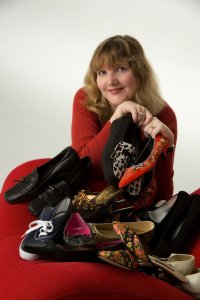 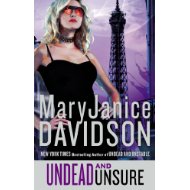 I’m so purr-fectly happy to welcome our good friend, the extremely talented and lovely Mary Janice Davidson, back to the blog!
MJ’s here to talk about the new Queen Betsy book, UNDEAD AND UNSURE, out this Tuesday, August 6!  She’s also been kind enough to provide us with an EXCLUSIVE sneak peek at UU!  This is the only place, kitties, you will be able to read this excerpt!

So, without any further ado….MJ!

Folks, Rocco and Giselle are the only cats I like, and one of them is fictional.  (And also dead.)

It’s nothing against cats as a species.  I’m a dog person from a long line of dog persons (dog people).  (I’m also the proud descendant of a long line of substance-abusing white trash.  It’s weird that I take pride in that, right?)  I like a pet who does stuff, like care if you live or die.  Cats, as Andrew Vachss wrote (brilliant, brilliant writer, better on his worst day than me on my best), are the lap dancers of the animal world:  the minute you’re done paying off, they’re outta there.

All this to talk about the new Betsy the Vampire Queen book, UNDEAD AND UNSURE, and dogs.  Specifically the vampire king’s dogs.  He has two of them now, because thanks to the events in the last book, UNDEAD AND UNSTABLE, Eric Sinclair can now bear sunlight for the first time in decades.  To celebrate, Betsy gets him two black lab puppies at tremendous expense:  the expense of the damage they did to Sinclair’s car on the way back from the puppy farm (you didn’t think Betsy would take her own car, did you?), Sinclair’s dignity (the term “Who loves Daddy the very very most?” has been heard, and he wasn’t talking to a human infant), and Betsy’s sanity (dogs are drawn to her, and love to lick her shoes).  Fur and Burr are new additions to the Undead family, and that’s just a taste.  Jessica’s pregnancy, now in the seventeenth or third or ninth trimester (no one, including Jess, can seem to keep track and no one seems to care, either) is coming to an end.  One way or the other.

Thanks for that sneak peek, MJ! Folks, be sure to get your copy of UNDEAD AND UNSURE August 6!

One lucky commenter here has a chance to win a copy of Undead and Unsure!

Next week…the interview you’ve all been waiting for!
I interview MIDNIGHT LOUIE!!!!!!!!!!

ROCCO
INCREDIBLE BLOGGING CAT
Posted by ROCCO LOTEMPIO at 10:05 AM