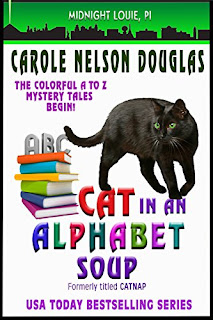 This book introduces us to an extraordinary sleuthing duo: Ms. Temple Barr, a 29-year-old Public Relations freelancer in Las Vegas, and the eighteen-pound jet-black tomcat called Midnight Louie who tells his own side of the story.

Temple is pursuing a cat in the exhibit hall at the Las Vegas ABA as fast as her spike heels will carry her–only to stumble over a dead publisher–and soon learns that the founder of Pennyroyal Press, a paperback house specializing in medical thrillers, had as many enemies as there are attendees at the ABA–and that’s 24,000.

But that’s not all. Baker & Taylor’s corporate mascots, the genial short-eared cats known and Baker and Taylor, have been snatched from their ABA booth and must be found before they’re done in. And first Temple needs to convince tall, stern, female lieutenant Molina of the Las Vegas Police that Temple herself is not up to no good. The lieutenant has all too many questions about the disappearance of Mystifying Max, the handsome stage magician who vanished from Temple’s life six months ago. Molina won’t believe that Temple knows nothing of his whereabouts . . .

What with Lieutenant Molina, Murder One and feline felony, it’s a wonder that Temple has time to notice the riveting Matt Devine, who’s just rented a condo from Temple’s landlady, in the circular building behind the Lover’s Knot Wedding chapel. But she does. . .

Catnap is narrated in part by Midnight Louie, the sleuthing tomcat who led Temple to the corpse. (You thought it was an accident?) Louie’s investigations are aided by his conversations with Ingram the bookstore cat and other felines, yet hampered by his resolve never to speak to humans. But Midnight Louie is one hardboiled, hairy-chested big dude. He always finds a way to bring the perpetrator to justice!

This book is fabulous! Carole Nelson Douglas weaves an intricate plot, and the way Louie is introduced to "His Human" Temple is nothing short of fantastic! Temple and Louie forge an undeniable bond in this book, which also introduces us to other characters that quickly become near and dear to our hearts.


ROCCO's rating: Five paws!!!!!!! You will LOVE this book! Thank you, Carole Nelson Douglas, for re-inventing Louie for a new generation of readers!!!!!!!


Buy it at: ALPHABET SOUP
Posted by ROCCO LOTEMPIO at 2:55 AM