Seven years ago this December, the first Nick and Nora mystery debuted and I had my very first author appearance at a Barnes and Noble a week later.  It was a joint appearance with another author...E.J.Copperman, aka Jeff Cohen. Believe me, I could not have gotten through that without Jeff's help, and I will be forever grateful to him.

It doens't hurt, either, that I was a fan of Jeff's writing long before I met him.  I was introduced to his Comedy Tonight mysteries by a friend of  mine after Jeff made an appearance at their book club.  Jeff (and E.J.) write their mysteries with suspense and just the right splash of humor...trust  me, there have been many times when I've pounded my keyboard and wished I were half as talented!

Jeff/EJ now has another excellent series out - the Jersey Girl Legal mysteries.  Book one was fantastic, and book two debuts today!

Here's the synopsis from Amazon:

The last person family lawyer Sandy Moss expects to walk into her courtroom, right in the middle of a trial, is TV star Patrick McNabb: prime suspect in her first (and she hopes, last) murder case.Sandy knows what Patrick’s like. Friendly, overconfident, dazzlingly handsome . . . and a well-meaning menace. But his request seems harmless enough. His dear friend Cynthia is getting divorced, and he thinks Sandy’s perfect for the job. She accepts – because he’s Patrick and there is no denying him.But of course it’s not that simple. Soon Sandy’s tangled up in yet another murder – and Patrick, who’s currently playing a private detective on TV, believes he’s essential to solving the whole thing . . . 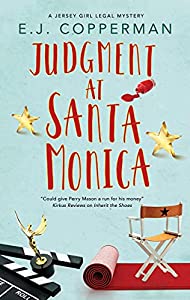 I did not think that EJ could surpass Book #1 Inherit the Shoes, but guess what!  He has!  Very memorable characters, particularly Sandy Moss and of course, Patrick.  I can't wait to see what other trouble EJ has planned for them to get into!  A resounding five stars (we'd give it ten if we could).  Pick up your copy today!