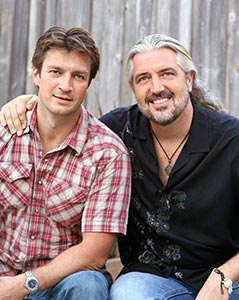 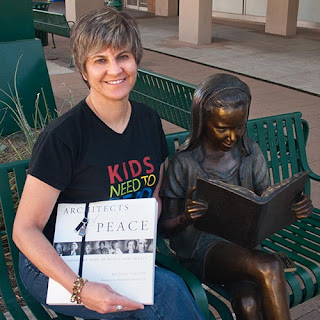 Since we’ve been spotlighting authors for EVERY WITCH WAY BUT WICKED in support of the charity, KIDS NEED TO READ, I thought my post today should spotlight the charity and two of its three co-founders:  actor Nathan Fillion and author PJ Haarsma. (the third founder and director, Denise Gary, was interviewed by me on October 14th – check my archives if you missed it, meow!)
Reading  is the single most important skill children must learn to be productive members of society. Books open their minds, inspire their imaginations and stimulate their intelligence. As budget cutbacks increase, funding for libraries is often the first thing to go, especially in failing school systems. There are great numbers of schools that have been unable to buy new books for their students to read in years. Kids Need to Read was established to fight this disaster by sending exciting new books to underfunded schools and libraries across the United States, as well as to other organizations that provide literacy support to children, particularly in disadvantaged areas.


I interviewed Denise Gary on October 14.  Now it's time to spotlight the other two co-founders.
NATHAN FILLION! (courtesy IMDB)
Born March 27, 1971, Fillion grew up the son of English teachers in Alberta, Canada. He attended Concordia University College of Alberta and the University of Alberta where he became active in local theater, especially improv comedy, and performed with the Rapid Fire Theater Company. He made his screen debut in the 1993 ABC TV movie, "Ordeal in the Arctic," a disaster drama filmed in Edmonton. Ironically, Fillion was performing regularly with the improvised soap opera show, "Die Nasty," when he landed a cast role on a real life soap opera, "One Life to Live." Fillion relocated to New York and for three years played the role of Joey Buchanan, son of the show's heroine Victoria, who endured uniquely precarious situations including a forbidden romance with the decades older Dorian, his mother's arch nemesis. The program showcased not only the husky-voiced actor's leading man potential, but his humor and affability as he more than capably handled both the requisite melodramatic scenes and lighthearted comic ones. For his efforts, he garnered a 1996 Daytime Emmy nomination as Outstanding Younger Leading Man.
Fillion made the move to features after he left the soap, heading to Hollywood where he snared a memorable cameo in Steven Spielberg's hard-hitting World War II drama "Saving Private Ryan" (1998).  He then put his skills to use in the recurring role of Johnny Donnelly, the likable jukebox repairman boyfriend of Traylor Howard's Sharon, on the ABC sitcom "Two Guys, a Girl and a Pizza Place" (ABC, 1998-2000). In 2002, Fillion was recruited by Joss Whedon to star in Fox's "Firefly" as Malcolm "Mal" Reynolds, the cynical, seemingly mercenary captain of the spaceship Serenity in the futuristic space opera that drew more inspiration from classic Westerns than typical sci-fi. The show managed to garner a devoted following, but not enough to keep it on the air. Whedon held on to Fillion, giving him a recurring role as Caleb, the final villain faced by the Slayer on the final season of "Buffy." Fillion became a big screen leading man in 2006 with his starring role in James Gunn's horror-comedy hybrid, "Slither" (2006), and the following year enjoyed glowing reviews for "Waitress" (2007), in which he co-starred as a doctor who falls in love with a pregnant patient who is enduring an abusive marriage. That fall he was cast in a brief role as Katherine Mayfair's ex-husband, Dr. Adam Mayfair, on the campy Sunday night mainstay "Desperate Housewives".
Re-teaming with Whedon, Fillion starred as a villainous superhero in "Dr. Horrible's Sing-Along Blog" (2008) a 45-minute web-only musical movie that earned a great deal of Internet buzz and a People's Choice Award for Best Web Sensation. In the spring of 2009, Fillion returned to the network that gave him his start to star as a novelist who joins forces with a detective (Stana Katic) to solve mysteries in the romantically-tinged series "Castle."  In 2007 he teamed with his friend, PJ Haarsma, and Denise Gary to form KIDS NEED TO READ, a non-profit organization that concentrates its efforts on supplying reading materials to disadvantaged areas.

Philip-Jon (PJ) Haarsma was born on June 5, in Ontario, Canada.  He moved to the US in l989 where he worked as a fashion and commercial photographer.  Haarsma owned a small production company called Redbear Films, Inc. which focused mainly on advertisements.  At 38, Haarsma decided to keep a daily journal, writing about anything and everything that came to his mind – and thus Johnny T, the main character in his Softwire series, was born.  Haarsma chose to give The Softwire a sci-fi setting due to a love of science fiction, and to target a young adult audience with his novels so that children could discover and learn to enjoy the genre.[6][7]

The Softwire is actually a story that Haarsma began imagining in his childhood.[8] As a teenager, he worked at his parents' ceramic factory during the summers, hauling fifty pound molds around in the extreme heat of a kiln room. To Haarsma, it felt similar to what the children of his books might feel as slaves. In addition to these experiences, there is a more prominent influence on the premise of The Softwire—that is, there is a mystery of a journey to a new, unknown place to start a new life. Growing up, Haarsma dreamed himself of moving to the United States; and in his twenties, he actually did. While there, living in New York, Miami, San Francisco and Los Angeles, Haarsma witnessed immigrants struggling to get by. He tried to imagine what caused them to risk everything, and to move to another country, and to have a chance at something better. It is this journey (and struggle) that is prevalent in The Softwire.[7]
In The Softwire, a group of human children are orphaned in outer space. They are forced into indentured servitude on the Rings of Orbis, four planet-like rings around a wormhole. They must spend four years as slaves or knudniks before they are eligible to become Citizens. Each year they are the property of a new owner on a separate ring: Orbis 1, Orbis 2, Orbis 3, and Orbis 4. They are forced into labor to do whatever task their new owner requires.  Haarsma's novels are accompanied by a free, online, role-playing game called Rings of Orbis[11] which acts as a visual companion to the books and is set in the same universe. Players are sometimes required to use information from the books in order to solve puzzles and to unlock areas within the game.[12] Pairing a video game with a novel for young readers, Haarsma says, “brings the book into their world, as opposed to going the other way around.”
While speaking at schools across the United States, Haarsma noticed how some school librarians were having trouble finding funds to purchase The Softwire books after a demand had been created by Haarsma's visit. Many of the librarians were struggling to fill their shelves with books. In June 2007, Haarsma and a friend, actor Nathan Fillion, approached a group of Fillion's fans (NathanNation, headed by Denise Gary)  with the idea for a project that would work to purchase books for underfunded schools, as well as nonprofit institutions which gave books directly to children. The group took to the idea and focused their energies into getting the project off the ground. The Kids Need to Read project went public in August 2007.
Meow!  Hope these little snippets have whetted your appetite to learn more about the charity the anthology is benefitting, KIDS NEED TO READ!
More info on PJ and Nathan Fillion can be found at Wikipedia and IMDB
For  more info on Kids Need to Read and their programs, visit www.kidsneedtoread.org

And now….our contest!
Three lucky people will have a chance to win a copy of EVERY WITCH WAY BUT WICKED!
Below are three questions pertaining to our group of authors! All you have to do, kitties, is choose ONE and answer it correctly!  Respond to this post in the comments section with the question and your answer (and an email address where we can contact you).  We will choose three lucky winners at random from the correct answers submitted to win a free e-copy of EVERY WITCH WAY BUT WICKED!
AND NOW, THE QUESTIONS –(DON’T FORGET – JUST CHOOSE ONE!)
And just for fun, a bonus – answer all three correctly and you will get an autographed photo of – oh, yes – ME, ROCCO THE SCI FI BLOGGING CAT!
So, what are you waiting for?  Start answering those questions!  Contest closes midnight, Sunday, October 30 – winners to be announced on Halloween!