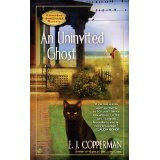 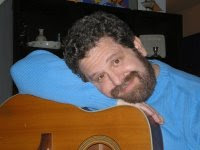 Meow! Today is a special treat - I interview mystery author Jeff Cohen!
Jeff is a freelance writer and the author of the Double Feature Mystery Series, and the Haunted Guesthouse series from Berkeley Prime Crime! He and my master also share an agent - Josh Getzler of HSG Literary!

So, without any further ado: Heeere's Jeff!

R: Meow, and welcome, Jeff! Tell our readers a bit about yourself and your writing, Jeff.
JC: Well, I’m a freelance writer (and have been for a LOOOOOOONG time) and the author of three mystery series: The Aaron Tucker series from Bancroft Press (FOR WHOM THE MINIVAN ROLLS, A FAREWELL TO LEGS, AS DOG IS MY WITNESS), the Double Feature Mystery series from Berkley Prime Crime (SOME LIKE IT HOT-BUTTERED, IT HAPPENED ONE KNIFE, A NIGHT AT THE OPERATION) and lately, under the name E.J. Copperman, the Haunted Guesthouse Mystery series (NIGHT OF THE LIVING DEED and just recently, AN UNINVITED GHOST). Three more books are due in that series, so I’d better get writing.

R: My Master is crazy about your Double Feature mystery series. How did that come to be?
JC: The Double Feature series was sort of a wish-fulfillment project for me. I’d always had this idea of opening a one-screen little movie house and showing only comedies, particularly the classic comedies I love the most. I knew I’d never be able to do that unless I won the lottery, so I let Elliot Freed do it. Problem was, in order to keep stories coming, he had to investigate murders, and that’s not something the average theater owner does on a regular basis. So it was a challenge, but I’m proud of those books. I think they’re a lot of fun.

R: Comedy is hard to write, and you do it so well. What do you attribute your expertise to?
JC: I studied at the feet of the masters: The Marx Brothers, Buster Keaton, Larry Gelbart, Mel Brooks, Carl Reiner, Bill Cosby… I could go on. I don’t know that it’s expertise so much as just a general instinct about what’s funny and what’s not. I know how to craft a joke, and I know when it’s not appropriate, so I don’t try too hard to cram them in when they shouldn’t be there.

R: Who would you consider has had the biggest influence in your writing?
JC: I honestly have absolutely no idea. I don’t recall ever consciously trying to write like anybody else.

R: What’s on the horizon in the future book-wise? Any more Double Feature mysteries or similar series we should look forward to?
JC: Alas, no more Double Feature books are in the planning stages, but like I said above, there will be three more (at least) Haunted Guesthouse books. That series takes place on the Jersey Shore where Alison Kerby has decided to turn a large Victorian into a guesthouse (not a bed and breakfast—no breakfast!), and then finds out that two ghosts are still hanging out in the place and aren’t able to leave. The second book in the series, AN UNINIVTED GHOST, just came out in April, and the third, OLD HAUNTS, is due in February—I’m doing the edits now. Books #4 and #5 are… let’s say I should be working right now.

R: If you weren’t a writer, what would you be doing now?
JC: Living off my huge investments, no doubt. I’ve never done anything for a living but write, first as a newspaper reporter, then a trade magazine reporter, and for the last more-years-than-I-care-to-discuss, freelancing for anybody who needed a writer. So I’ve never considered another profession. I would definitely not be a doctor. I can’t doct.

R: What do you like best about writing in the mystery genre?
JC: For me, the characters are more important than the machinations of the plot. If I come up with a character I want to spend time with, I’ll find a mystery for him/her to solve. The idea of answering a large question—and that’s what mysteries are about—appeals to me.

R: What are some of your must read books/authors?
JC: Oh, no. You’re not getting me involved in that. I start naming writers like Julia Spencer-Fleming, Chris Grabenstein, Lorraine Bartlett (and the various permutations of her name under which she writes) and Ellery Adams, and I’m bound to leave someone out who’ll get mad at me. So I’m certainly not going to mention any names. Nice try.

If you were a drink, what would you be: A caffeine-free Diet Coke

Spies or Spooks? No thanks, I had lunch on the way here.

R: What’s the craziest thing you’ve ever done?
JC: Besides this interview? Having children. Anyone who does that is really going out on a limb.

R: It’s been a real pleasure to interview you, Jeff, Meow! In closing, what’s the one thing you would hope your readers would take away from your writing?
JC: The desire to read more of it.

You can find out more about the Haunted Guesthouse series at the EJ Copperman site:
http://www.ejcopperman.com/

And don’t forget to visit Jeff on Facebook and Twitter, and read him at Hey, There’s A Dead Guy In The Living Room, the most comprehensive blog on mystery writing. Besides Jeff Cohen (Monday’s blogger), you’ll see perspectives from folks like literary agent Josh Getzler and editor Alison Janssen. Check in every day for something new on mysteries, books and publishing!

Jeff,we can’t wait for your next book! Meow!
Posted by ROCCO LOTEMPIO at 2:56 AM